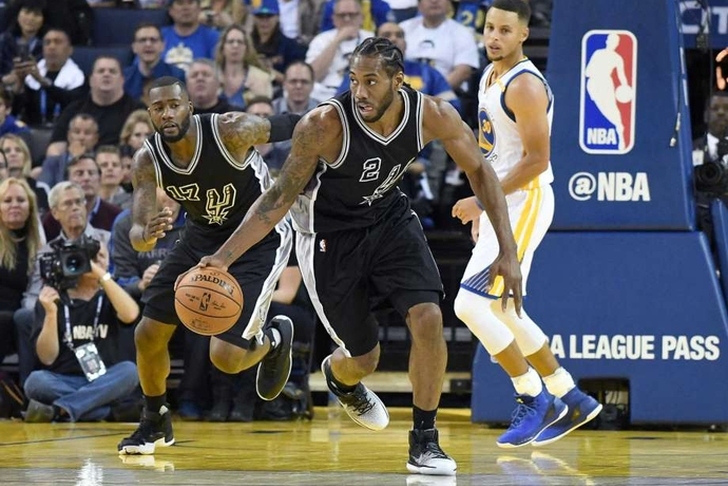 The Golden State Warriors came into this game as 10-point favorites and hadn't lost a game yet this postseason.

Clearly, the San Antonio Spurs were not impressed.

After a tight opening of the game, the Spurs ripped off a stunning 28-5 run to take a commanding 25-point lead in the second quarter and have cruised from then on to this point, leading the Warriors 62-42 at halftime.

Kawhi flies through the lane to throw down a monster jam! #GoSpursGo #NBA #NBAPlayoffs pic.twitter.com/H5FMTvLfLP

San Antonio's defense was the biggest story of the opening 24 minutes. They limited Golden State's potent offense to just 19 points on their first 31 possessions (first 16+ minutes of the game), and the Warriors' 16 first-quarter points were the lowest they scored in any quarter in these playoffs.

Draymond goes up for the slam...and Gasol says NO! #GoSpursGo #NBA #NBAPlayoffs pic.twitter.com/vhXzlEbB1Q

Furthermore, the Spurs held Golden State to just 35.1 percent shooting and - more impressively - 2/9 from three-point range. Stephen Curry made their first three with just 5:05 left in the second quarter. That opening stretch (19 minutes) is the longest the Warriors have gone this season without making a three.

Curry is doing his part to bring the #Warriors back, stealing the inbounds pass and draining the three! #DubNation #NBA #NBAPlayoffs pic.twitter.com/zOhlOOVh3m

Curry finished the half with 14 points, while Kevin Durant added another 14 for Golden State. No other Warriors player made more than one field goal in the half.

Kawhi Leonard finished the opening frame with game-highs in points (18) and rebounds (eight) to lead the Spurs. LaMarcus Aldridge also had 17 points, while Manu Ginobili added nine points off the bench.