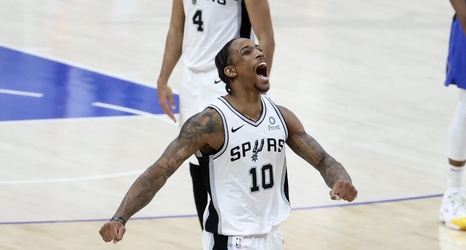 The Spurs snapped a five-game losing streak on Sunday in Dallas. Thanks to a fantastic offensive performance by DeMar DeRozan that included a game-winner, they prevailed against the Mavericks 119-117 in a fun, hard-fought matchup.

After a close loss to the Nuggets on Friday, the Spurs came out with a clear sense of urgency. The two-man game of Luka Doncic and Kristaps Porzingis was a huge issue early on, but the guards, with Dejounte Murray leading the way, were using their length to try to disrupt the Mavericks’ flow, so that only the stars could hurt them. On the other end, they hunted Doncic, a strategy they’d use for most of the game.