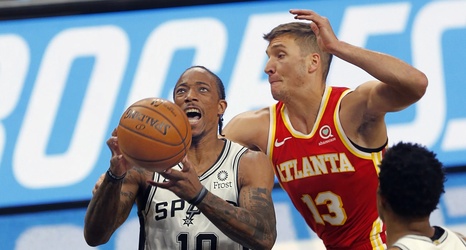 San Antonio fell heartbreakingly short on the second night of a back-to-back as fresher legs prevailed down the stretch of their double-overtime battle with the Hawks on Thursday night.

While the Spurs came within two points of securing a new single-game season-high, their porous defense couldn’t keep an upstart Atlanta team from dropping 134 points on 50% shooting.

Derrick White and DeMar DeRozan were spectacular despite the loss, with the former scoring a career-high 29 points and the latter pouring in 36 points, five rebounds, and nine assists.

Derrick began the game with a confident three-pointer off the dribble, setting the tone for what would eventually become a career-night from beyond the arc.