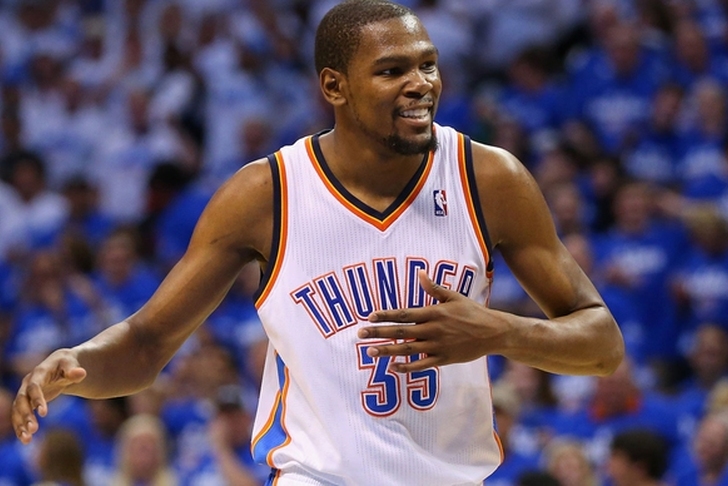 The NBA Draft is over and the San Antonio Spurs have turned their full attention to the start of free agency on July 1st. The Spurs have some cap space and could try to add a star, such as Mike Conley or Kevin Durant. Here are all the latest Spurs rumors and news and you need to know.

Details On Durant's Meeting With Spurs
The Spurs were one of the first three teams to secure meetings with Kevin Durant, along with the Golden State Warriors and Oklahoma City Thunder. That's a promising sign for their chances, and ESPN's Marc Stein has a few details on the Spurs' planned pitch.

The Warriors and Spurs, sources say, are both planning to load a plane full of key organizational figures - including Stephen Curry and Klay Thompson for Golden State and Gregg Popovich and Tim Duncan for San Antonio - to fly to an undisclosed location once free-agency season starts to try to lure Durant away from the only franchise he has ever played for.

The Spurs are a dark horse at best to land Durant. The Thunder are still the favorite, but that the Spurs are at least getting a meeting is a promising sign.

San Antonio Looking To Bring Over Lorbek?
If you're wondering who Erazem Lorbek is, you're probably not alone. He's a 6-foot-10 forward from Slovenia that the Spurs acquired in the George Hill - Kawhi Leonard trade. Now, the San Antonio Express-News reports the Spurs are looking into bringing Lorbek over to the states. However, there are some complications. Lorbek didn't play overseas last season, as the 32-year-old sat out the season. He hasn't played since 2014, and there are worries about his physical condition. Step one appears to be a workout with the Spurs, to see if Lorbek is in shape. If he passes, Lorbek could play in the Summer League, giving him a chance to prove himself and make his way onto the Spurs roster.

Follow our San Antonio Spurs team page for all the latest Spurs Rumors, or download the Chat Sports App!