Kawhi Leads Spurs To Dominant 121-96 Win Over Rockets, Even Series 1-1 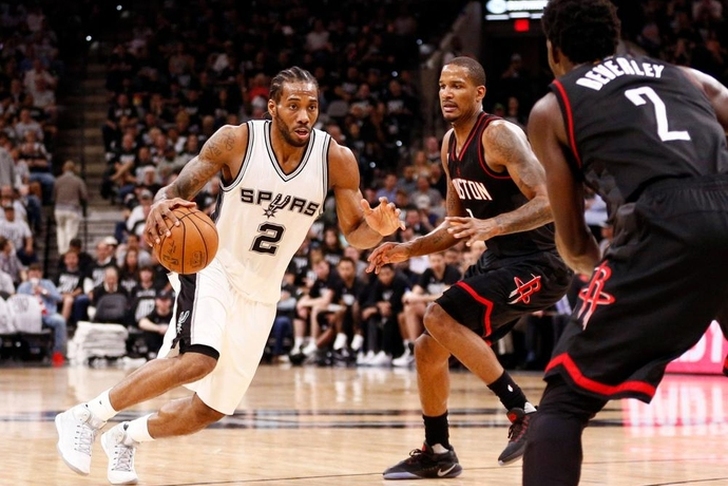 The San Antonio Spurs needed a win in the worst way, and Kawhi Leonard stepped up and gave it to them.

Led by Kawhi's 34 points, eight assists (a career high) and seven rebounds, the Spurs rebounded from Monday's huge blowout loss with a convincing 121-96 win over the Houston Rockets. The series is now tied 1-1.

This San Antonio team looked completely different than the one that got dismantled in Game 1. They were crisp, sharp and focused, particularly Leonard. As a result, they were able to control most of the first half and took a 65-55 lead into the break.

Kawhi Leonard ignites the @spurs with 20 first half points! pic.twitter.com/aPsKPrJJ63

However, Houston came alive in the third quarter and cut San Antonio's lead to four. All that did was wake the Spurs back up.

Jonathon Simmons beat the third quarter buzzer and kicked off a massive 28-5 run that spanned the entire first half of the fourth quarter to break this game open.

Jonathon Simmons powers through the contact for the slam...AND THE FOUL! #GoSpursGo #NBA #NBAPlayoffs pic.twitter.com/8gEvtmhCfL

Tony Parker stepped up and had his best game of the postseason with 18 points, but he left the game in the fourth quarter with a knee injury. LaMarcus Aldridge (15 points, eight rebounds) and Danny Green (12 points) also played well for the Spurs.

James Harden had his worst game of the playoffs, and that was the biggest reason behind Houston's struggles. He scored 13 points on just 3-17 shooting, but did add 10 assists and seven rebounds. Ryan Anderson led the Rockets with 18 points and eight rebounds.

Game 3 will move this series to Houston on Friday. Tip-off time is set for 9:30 pm ET on ESPN.