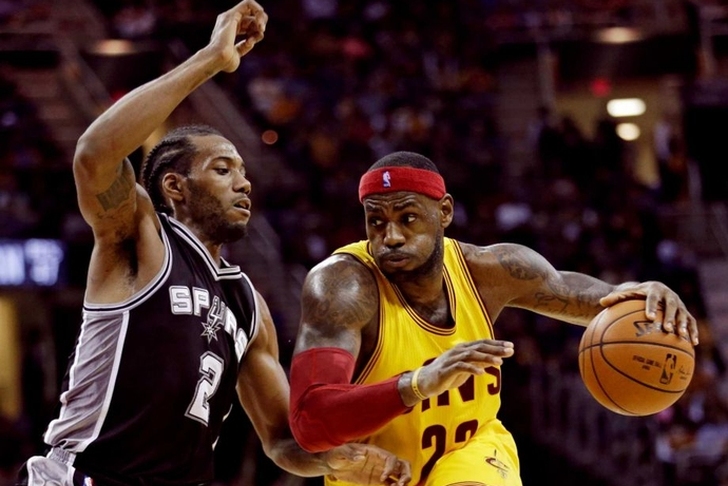 The 39-7 San Antonio Spurs visit the 33-12 Cleveland Cavaliers tonight in a battle of two teams with NBA title hopes. The Spurs are red-hot, with just one loss this month. The Cavs lead the Eastern Conference, but that wasn't enough to save head coach David Blatt's job. Tyronn Lue took over for Blatt, posting a 3-1 record so far. The last time these two teams played, the Spurs won at home, 99-95. Here's our preview and all the information you need to know for tonight's contest.

What They're Saying About The Spurs:
Duncan Out Against Cavs
Spurs Using Small-Ball Without Duncan
Spurs Send McCallum to D-League

What They're Saying About The Cavs:
LeBron James Argued With Tristan Thompson On Court
Tyronn Lue and Kevin Love Need Each Other
Lue Surprised Cavs Got Only One All-Star

Notable Storylines:
Kawhi Leonard vs. LeBron James. Leonard and James are two of the best forwards in the NBA, especially now that Leonard has taken the next step in his offensive development. Both players are great defenders and they should matchup with each other often. If that happens, it should make for a fun matchup. If James can't outplay Leonard, the Cavs are in trouble. For more on LeBron vs. Kawhi, check out the Chat Sports Android and iPhone app.

How do the Cavs respond to playing a back-to-back? Last night, the Cavs beat the Pistons 114-106 in Detroit. They're back home tonight and playing back-to-back games is never easy. It wasn't a long trip from Detroit, but the Cavs might be running on limited energy. The Spurs haven't played since Wednesday.

Does LaMarcus Aldridge step up? Aldridge was a non-factor in the Spurs' 120-90 loss to Golden State earlier this week. He bounced back against the Rockets with 25 points and 10 rebounds in San Antonio's 130-99 win. The Spurs need Aldridge to play well if they're going to beat the Cavs. Check out the Chat Sports Android and iPhone app for more on the Cavs-Spurs battle.

Prediction: Spurs Win 103-100
The Spurs' stingy defense steps up, and they pick up a narrow win over the Cavs. LaMarcus Aldridge plays like he did against Houston and the Cavs run out of gas at the end of the game. James and Leonard both play well, but Kevin Love struggles slightly. That proves to be a key difference in the outcome.