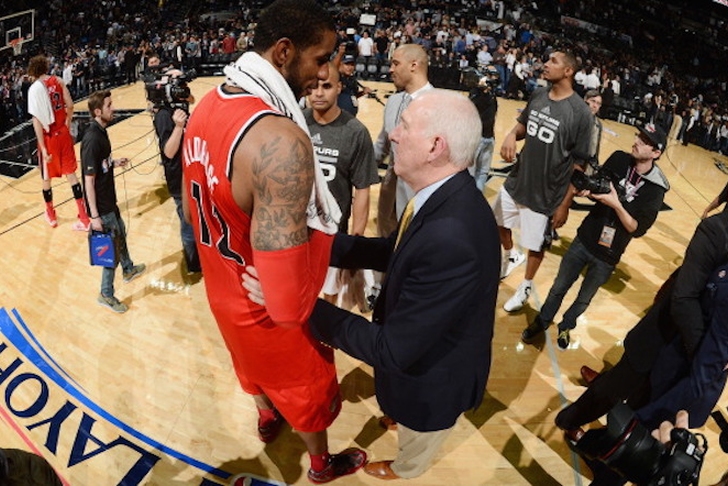 The San Antonio Spurs plan to go after Portland's LaMarcus Aldridge in free agency this summer, hoping to lure the All-Star away from the Blazers.

Aldridge has already said he wants to be “the best Blazer ever,” and that he plans to to sign a new with a five-year contract just as soon as he is able to. Portland winning, largely thanks to the duo of Aldridge and point guard Damian Lillard, and they can offer Aldridge one more year and many more millions on a max deal than any other team in the league can.

However, there is a lot of chatter in league circles about the Spurs being a realistic option for Aldridge, according to Zach Lowe of Grantland:

This could be random, but nearly a half-dozen executives from different teams mentioned the possibility of the Spurs luring LaMarcus Aldridge in free agency with a max contract.

San Antonio waited on a Kawhi Leonard extension precisely to hoard max cap space this summer in case both Tim Duncan and Manu Ginobili retire. Dallas could have max-level space, though it’d have to renounce several very good free agents to get it. Houston would need to cut some salary, but it also has the goods to put together a solid sign-and-trade offer if Aldridge makes it known he’d prefer to go there.

This is probably much ado about very little.

Aldridge is averaging 23.2 points and 10.2 rebounds in 35.8 minutes a game. He has spent his entire eight-year career with the Trail Blazers.