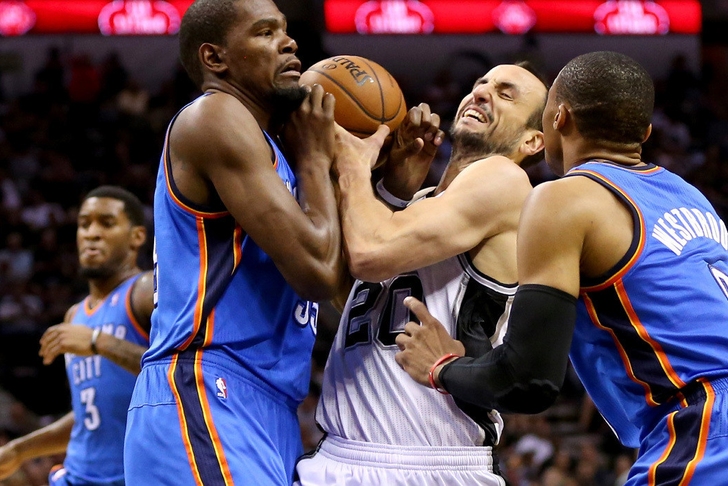 Game 5 of the Western Conference Finals between the Oklahoma City Thunder and the San Antonio Spurs will take place tonight at the AT&T Center in San Antonio, with tipoff scheduled for 9:00PM EST.

Latest on the Thunder/What They’re Saying:

Russell Westbrook won't change, and he's taking the entire NBA with him (Welcome to Loud City)

Has Scott Brooks saved his job? (Welcome to Loud City)

Can the Spurs' starters mimic the bench's Game 4 success? (Pounding the Rock)

The Western Conference Finals has been the tale of two mini-series, with both teams dominating on their home courts to basically turn this into a best-of-three starting tonight in San Antonio.

The San Antonio Spurs have been down this road before with the Oklahoma City Thunder. In 2012, the Spurs took a 2-0 lead on the Thunder in the Western Conference Finals, before the Thunder rattled off four straight victories to unceremoniously bounce San Antonio from the playoffs.

Game 5 may come down to whether or not the Spurs' veteran lineup can match the intensity and fire shown by the Thunder's youthful core of stars in Oklahoma City. The biggest key for the Spurs in that regard could be keying in on Russell Westbrook - whose 40 points, 10 assists, and five steals in Game 4 ignited both his team and a raucous OKC crowd on the way to a 105-92 victory that looks closer score-wise than it actually was.

Now, it's San Antonio's turn again to try and hold serve in front of their own passionate fan base, or face a desperate situation going back to Oklahoma down 3-2.

Any way you look at it, this has classic written all over it regardless of who comes out on top.