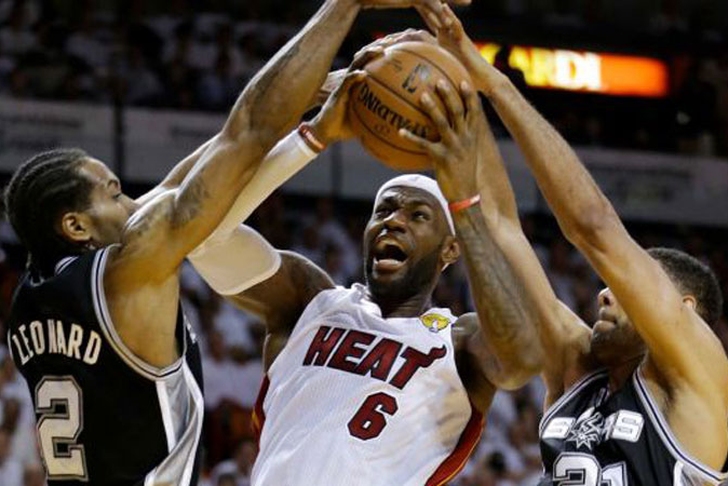 Game 5 of the 2014 NBA Finals between the Miami Heat and the San Antonio Spurs is live from the AT&T Center in San Antonio tonight, with tip scheduled for 8:00pm EST.

Duncan's legacy isn't something he thinks about (Yahoo! Sports)

Chris Bosh on NBA Finals: It's not ending in Game 5 (Yardbarker)

The truth about Heat fans and those boos (Hot Hot Hoops)

In an attempt to find some way to turn this series around, Miami Heat star Chris Bosh had teammates Udonis Haslem, Dwyane Wade, and LeBron James over for dinner on Friday night - trying to ascertain the right away to approach coming back from a 3-1 deficit.

The first step for the Heat in climbing the mountain ahead is finding a way to take Game 5 tonight in front of a raucous San Antonio Spurs crowd hungry for the team's first title in seven years.

"We're not so entitled or jaded that we're above having to fight for it, and that's what it is right now," Heat coach Erik Spoelstra stated, via the Associated Press. "It's competition. So we've got to find a way to fight and get this next game, and that's what it's all about."

LeBron James, leading the Heat in points (27.2), rebounds (6.9), and assists (4.7) in these Finals, knows it's on him to provide the spark of leadership necessary to overcome the long odds necessary for a Miami three-peat.

"It would be in the range of, `Why not us?" James said Saturday about what he will say to his teammates prior to Sunday's Game 5. "Why not us? History is broken all the time. And obviously we know we're against the greatest of odds."

San Antonio's Tim Duncan knows that the Spurs have to try and match that desperate intensity to keep the series from returning to South Beach for Game 6 on Tuesday.

"They're going to come out and give us their best punch possible," Spurs star Tim Duncan said. "We know that they're back-to-back champs and they've been in this situation before and they have all the confidence in the world that they can win these games. So we have to do just the same."

"Come out there and say, hey, we're going to take it little by little, quarter by quarter, and see what happens."