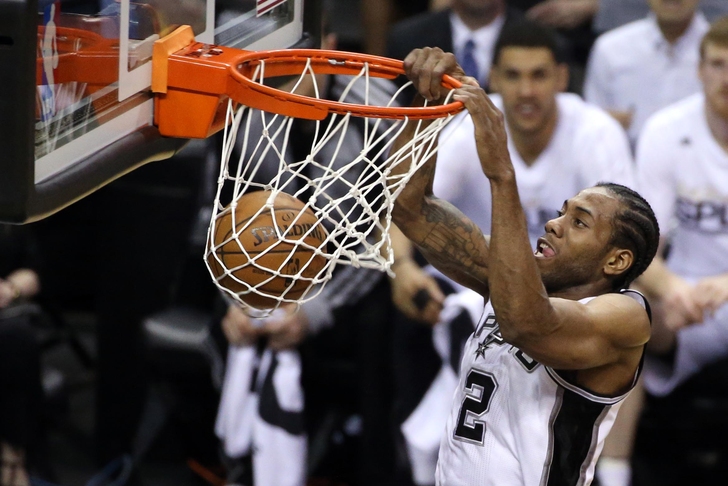 All sixteen teams who qualify for the 2015 NBA Playoffs will have their own unique sets of strengths and question marks heading into postseason play, and the defending champion San Antonio Spurs aren't any different. With that in mind, here's 3 Burning Questions For The Spurs Heading Into The NBA Playoffs.

Whose Offense Will It Be During The Playoff Run?

Tony Parker said recently that the time will come for San Antonio's big three to step aside and for the offense to flow through budding superstar Kawhi Leonard. If/when the team's veteran core sees extended minutes during a long playoff run, the time may come for Leonard to take the reins of the offense -- dropping mid-range jumpers, slashing like a mad man, and helping to take some of the onus off of Parker, Tim Duncan, and Manu Ginobili.

Speaking Of The Veterans...

We all know San Antonio's timeless trio have superhuman powers or something like that, but another deep run in the playoffs will add even more tread on the tires of all three San Antonio stars. Coach Gregg Popovich has once again done a masterful job weaving games off for Duncan/Ginobili/Parker into the team's regular-season schedule, but it's still going to be interesting to see if they are as spry and energized as they were in 2014's championship run.

If the season ended today and the Golden State Warriors & San Antonio Spurs both took care of business in the first round, that's the insanely intriguing matchup we'd see in the Western Conference Semifinals. San Antonio was one of the few teams to make Golden State look human this year, but the Dubs' near-historic level of depth from starter to bench would make this a dogfight of epic proportions.