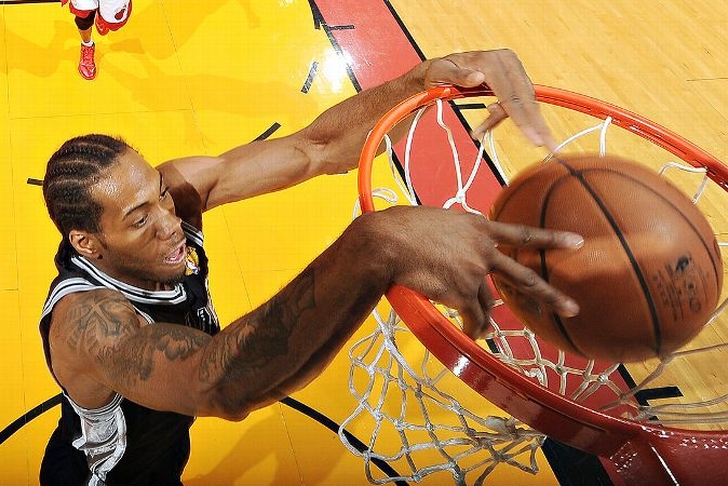 It's do or die for the Miami Heat, as they come into Game 5 in Texas needing three straight victories against the San Antonio Spurs to capture their third straight NBA title.

Dwyane Wade drains a mid-range jumper after Miami wins the tip to open the scoring, followed by a LeBron James deuce off a bad Spurs possession. 4-0 Miami.

This is followed by miss after miss by each team from the field, before LeBron James picks up a shooting foul on Kawhi Leonard. Two freebies, and the Heat are off to a 6-0 run to start. 9:42 left in the first.

The teams trade lost possessions from there, before Tim Duncan is stripped down low after a feed from Boris Diaw. While Duncan looks for a foul call that doesn't come, LeBron turns a missed Wade jump on the other end into a two-handed flush off the rebound. Spurs timeout as Miami is off to a 8-0 advantage at the 8:41 mark.

San Antonio was 0-for-5 from the field at this point, looking out of sync in their cycle offense.

Coming back from commercial, the Spurs go back to the basics - feeding Duncan down low so that he can pick up a couple free throws on a hack. 8-2.

The Heat, looking very measured in their offensive attack, pick up a LeBron James rhythm three after the teams exchange misses. 11-2 run for Miami, as San Antonio promptly turns it over on their very next touch.

That leads to the Miami advantage extending to 13-2, as James finds Bosh under the basket with a solid pass.

The Spurs finally hit their first shot from the field on their next trip down, as Kawhi Leonard drills a long-range bomb off a Tony Parker dime to cut it to 13-5. 7:13 on the clock.

Rashard Lewis brings the Heat's lead back to double digits on Miami's subsequent touch, saving Chris Bosh with a triple after Bosh seemed extremely tentative with the ball. 16-5.

Off a long rebound on a San Antonio miss, the Heat break out in transition - leading to a controversial and-one for LeBron. The Heat up 19-5 halfway through the first.

A Boris Diaw miss would make the Spurs 1-for-11 from the field, but the Spurs would get it right back after Tiago Splitter takes it away from Ray Allen. Despite the fact that Patty Mills had a layup swatted by LeBron James on the trip back, the Spurs do get a point out of the trip after Splitter hits one at the line after getting fouled.

The Heat take a page out of the Spurs' early series playbook, passing the ball beautifully around the perimeter on their next touch to give Ray Allen a wide-open look from three. He nails it, and the Heat lead 22-6.

San Antonio gets that triple right back, after Manu Ginobli draws an and-one out of Rashard Lewis. 22-9.

After a questionable offensive foul on Shane Battier, the Spurs get the crowd right back into the proceedings - as Manu Ginobli hits a right-center triple to force a Heat timeout. 6-0 run for San Antonio. 22-12 Heat with 4:26 left in the first. LeBron leading all scorers with over half (12) of Miami's scoring output.

Ray Allen shimmies and shakes his way into a mid-range jumper attempt for Miami coming back, but he misses. San Antonio cuts their lead to seven right away on the return, as Kawhi Leonard drills a 26-footer. 22-15.

The teams trade misses for the next 60 seconds, until Matt Bonner (!) gets penetration for the Spurs before finding Patty Mills at the top of the arc. Mills bounced in a triple, giving the Spurs a 12-0 run. 22-18.

LeBron James? He's not done...getting his 15th point of the quarter with a dead-eye triple to extend the lead to 25-18 coming up on two minutes left in the frame.

With Norris Cole now in the game for Ray Allen, the Heat still kept clicking - turning a missed three from Patty Mills into two LeBron free throws on the other end. 27-18 Heat, as LeBron has 17.

It becomes 27-20 Heat quickly after, as Splitter makes a great move down low to put it home.

Tony Parker missed his fourth straight shot after the Heat fail to convert on their touch. Both teams again trade zeroes, as the Heat emerge with the ball with 29 seconds left.

The recently-entered Norris Cole picks up a foul driving to the lane, giving Miami two free throws to make it 29-20.

Kawhi Leonard heads to the charity stripe on the Spurs' next touch, drawing his own shooting foul. He nails them both to make it 29-22.

LeBron James, in an effort to get his 20th point of the quarter, misses a long triple at the buzzer. Regardless, Miami up 29-22 at the end of one.