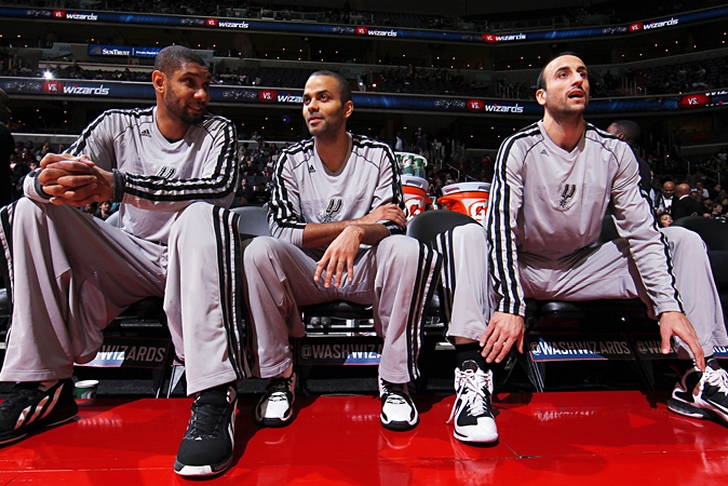 Miss any of Sunday's Game 5? Be sure to catch up with our first quarter recap!

Every Miami Heat player not named LeBron James combined for 4-for-12 shooting in the first quarter of Game 5. LeBron? 5-for-7 and 17 points in the frame, to give Miami a 29-22 advantage over the San Antonio Spurs after the first twelve minutes.

That seven-point lead is shaved to three quickly, however, as Kawhi Leonard drops in a sick finish on an alley-oop and a long two to make it 29-26. 12 points for Leonard.

The teams trade missed opportunities for the next 75 seconds or so, as Tony Parker misses his sixth straight shot on a three-point attempt.

Right after, Chris Bosh extends the Miami lead to seven - hitting an open 17-footer on a Ray Allen assist. 33-26.

Danny Green misses a gimme 11-footer on San Antonio's next run down the floor, but LeBron James gives it away to the Spurs' Boris Diaw, giving them a fresh 24-second clock.

From there, a kick ball keeps possession with San Antonio as the game heads to an official timeout. 33-26 Heat at the 8:33 mark.

The Heat get it right back on a Chris Andersen steal, but Bosh misses a jumper on a quick transition look.

Ball in hand, Tony Parker finds Tim Duncan down low. Duncan turns and shoots over Udonis Haslem, using his length as a buffer, and hits on the edge of the key. 33-28.

Dwyane Wade then decides to go into vintage Wade mode, dicing through three Spurs defenders to pick up a shooting foul at the hoop. Wade hits both, and it's 35-28 Heat with 7:11 left in the half.

The Spurs get two chances at it on their return down the floor, and Marco Belinelli strokes a gorgeous two through the twine from 19 feet. 35-30.

Udonis Haslem misses a 19-footer on the other end, as the Spurs get it back. San Antonio cycles it down to Duncan for the third straight possession (attempting to take advantage of a one-on-one matchup with Haslem), and Duncan rolls around - hitting a pretty running hook to send the game to commercial with a Heat timeout. Miami's sixteen-point lead is cut to three, 35-32 with 6:01 left in the half.

Ray Allen commits an offensive foul as the Heat come out of the break a little tentative.

The Spurs cut the deficit to one from there, as Duncan continues his torrid second quarter with a layup after a Diaw dime. 35-34 as the crowd goes nuts.

It just gets louded, as the Spurs take a Heat miss right back down the floor - leading to a Kawhi Leonard laser for three. 37-35 Spurs, as they have their first lead of the game with 4:30 left.

The teams trade rushed looks for the next 35-40 seconds, as the Spurs slow it down up by two. That little lull allows the Spurs to set up their offense to perfection - as Manu Ginobli gets an easy deuce down low to send the game to a commercial. Heat timeout as the Spurs lead 39-35 with 3:32 left.

Dwyane Wade tries to break down Patty Mills one-on-one on Miami's next touch, but he pushes off on Mills to commit the charge. Mills leaves the game to a great ovation, as Tony Parker comes back for San Antonio.

Manu Ginobli makes a heady veteran play swinging around the perimeter, getting to the hoop and drawing a continuation foul on Norris Cole. He hits one of two, and the lead is five with 3:01 left.

Bosh misses a triple on Miami's next possession, leading to a highlight one-handed monster dunk by Ginobli. 42-35 Spurs.

LeBron James cuts it to five on a seven-footer, but Manu Ginobli has another big-time play in him - drilling a 26-foot cycle three to give the Spurs their biggest advantage of the game, 45-37.

James draws a block on Kawhi Leonard on the next Heat offensive series, sending the game to commercial on a Spurs timeout. 45-37 San Antonio with 1:54 left in the half.

James gets one of two at the stripe coming back, cutting the disadvantage to seven. It would drop to five on a soft-touch floater by Dwyane Wade soon after. 45-40 with 1:20 left.

Boris Diaw gets his first two points of the game on the Spurs' next possession, laying it in off a Danny Green dime.

The teams exchange misses, including Tony Parker's seventh straight miss to start the game. The Spurs get two touches though after Parker's miss, running the clock down.

Diaw misses a triple from the sideline close to the buzzer, as the half ends. Spurs outscore the Heat 25-11 in the quarter, as San Antonio leads 47-40 at the half.