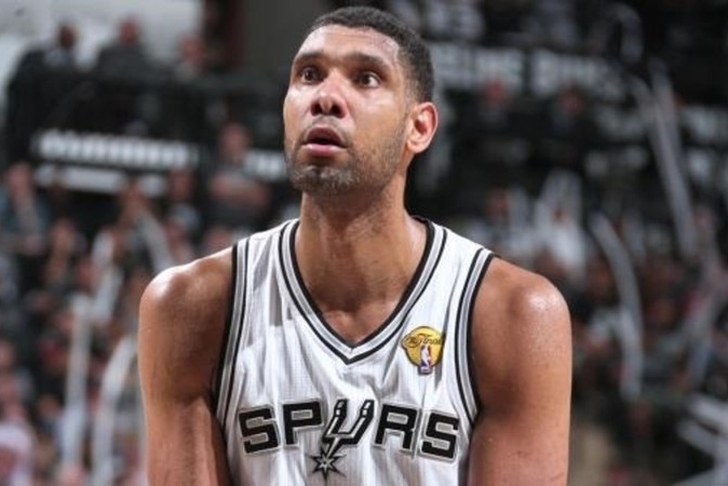 With the San Antonio Spurs holding a 2-1 series advantage in these finals, the Miami Heat came out of the gate in Game 4 with notable urgency.

After the teams traded misses to start, Chris Bosh attacked the rim for an easy two under the basket to open the game's scoring.

San Antonio got two shot clocks to make something happen in response, along with a 14-second reset on a Miami foul. They couldn't convert, however, as Boris Diaw missed a mid-range jumper.

After a Mario Chalmers miss at the other end, Kawhi Leonard darts a beautiful pass to Duncan for an easy two down low. Game tied at 2.

A Dwyane Wade miss on a bunny shot from six feet led to a quick two for San Antonio on the other end, as Tony Parker drained a 7-footer. After a Spurs free throw following a Miami miss, Miami got back on track with a short-range hit from Rashard Lewis.

San Antonio would have a quick counter, though, embarking on a 5-0 run thanks to some lockdown defense and keyed by a Danny Green triple. 10-4 Spurs with 7:58 left in the quarter.

Rashard Lewis would miss another mid-range attempt, which in turn leads to San Antonio their run to 8-0 with Danny Green's second triple in the first five minutes or so. Timeout Heat. Spurs up 13-4 with 6:52 left in the first. The Heat opened in a shooting funk, 2-for-7 from the field (28.6%).

Dwyane Wade chipped away at the run on the Heat's second trip after the break, hitting a floater to make it 13-6. It became 13-8 soon after, as a Spurs miss led to an aggressive bucket for Chris Bosh at the rim.

Bosh wasn't done, getting another high-energy two on a Spurs miss - making it 13-10 going into a Spurs timeout with just under 5 remaining.

Tony Parker extended the lead to five coming out of the break, nailing a 20-footer in front of a great contest by Wade.

The game started to get extremely physical after Parker's shot, with the team's basically beating each other up on defense - one particularly tough play leading to two Kawhi Leonard freebies. 17-10 Spurs

The Heat cut the lead to four almost straightaway, as LeBron James drills a rhythm three. 17-13.

The team traded missed opportunities from there, before Matt Bonner floats inside for a quick two. 19-13 Spurs.

San Antonio would then extend the advantage to 24-15 with a 5-2 run highlighted by a Patty Mills "bang!" triple.

That lead was almost instantly cut to seven, though, on a LeBron James jumper.

Transition became the Spurs' best friend on their next touch, as Patty Mills got free for a transition layup. A LeBron James miss finishes the quarter, with the Spurs leading 26-17.