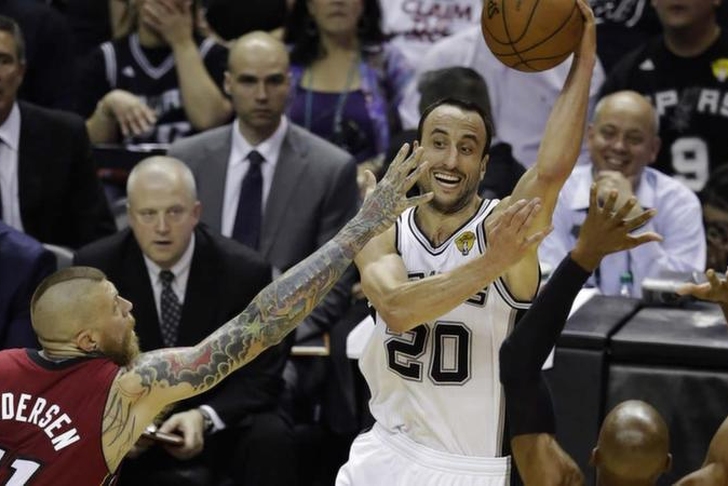 The San Antonio Spurs open up Game 3 of the 2014 NBA Finals with a great bit of passing, finding Boris Diaw down low for an easy bucket. Chris Bosh tied it up right away, however, with a quick bucket under the basket.

The Miami Heat have been getting great production out of veteran Rashard Lewis, who gives the Heat a 4-2 lead early with an aggressive score.

The Spurs grab the lead right back however, picking up a couple quick free throws, then a steal, and an easy Danny Green score. 6-4 Spurs.

LeBron James wouldn't let the Spurs' lead sit for long though, muscling his way to the hoop for a quick deuce to tie the game at six.

After another pair of free throws for the Spurs, Dwyane Wade tied the game again at eight with a "ring it up" 15-footer.

Kawhi Leonard took over the next 45 seconds for the Spurs, getting an and-one on a tough drive to the hoop, and then picking up another two in transition off a Danny Green steal.

After a couple LeBron free throws and a pretty driving eight-footer from Green in response, Kawhi Leonard does it again - hitting a dead-eye 26-footer off a Green dime to force a full timeout by the Heat. 18-10 Spurs with 7:22 left. Spurs shooting 6-for-7 from the field at this point, looking completely in sync on offense.

Make that 7-of-8 off the break, as the Spurs take a Heat miss right down the floor and convert it into a quick Boris Diaw bucket - extending the lead to ten. That lead would balloon to twelve on a pretty Tim Duncan-to-Danny Green feed to the hoop. 22-10 Spurs with 6:05 left.

James would cut the lead to ten right away, but Kawhi Leonard continues his insane first quarter - draining his third three of the frame to make the score 25-12. Leonard led all scorers with 13 at this point.

The Heat's offensive philosophy begins to show itself on their possession, as James gets an iso look down load and drains a floater over two defenders when Duncan comes in to help.

More LeBron James on the Heat's next touch, as he answers a Spurs free throw with a nothing-but-net three to cut the Spurs' lead to single digits, 26-17.

Call it deja vu on the next two possessions, as Tim Duncan hits one of two at the line after a James Jones shooting foul, followed by - you guessed it - a LeBron three, this time taking advantage of a late closeout by Tim Duncan to shave the lead down to seven. Spurs timeout with San Antonio up 27-20 at the 3:43 mark.

James Jones gets himself into very early foul trouble out of the break, stepping on the Spurs' Matt Bonner's foot to cost the Heat a couple of free throws. Spurs by 9, 29-20.

Norris Cole makes a relatively bad decision on the Heat's next possession, bypassing a look on the screen and roll and throwing the ball away trying to get the ball in to Chris Anderson.

After the teams trade empty trips down the floor, the Spurs get the ball back for a gorgeous tic-tac-toe passing clinic from Leonard to Diaw to Splitter, ending again in a couple of Spurs freebies after Splitter was hacked on the miss. Spurs back up double digits, 31-20.

The announcers call Ray Allen's name for what seems like the first time in the game on the Heat's next touch, as Allen breaks down the Spurs' D with an expert crossover, putting home a runner and drawing a foul for the three-point play. 31-23.

The Spurs would quickly push the lead back to double digits on back-to-back instructional tape-style possessions, with pretty passes leading to easy buckets for Splitter and Ginobli. Lead to twelve.

Make that fifteen, as a bad Heat offensive possession segues to a Danny Green corner three on another great passing sequence. Lead to 15.

Then, Ginobli happened. Manu answers a quick Heat bucket with a laser three-pointer, extending to lead to sixteen at the buzzer. Spurs lead 41-25 after one.