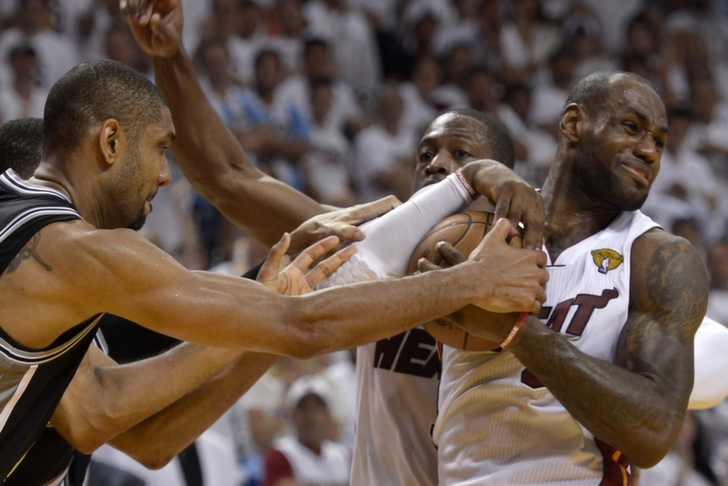 Miss any of Tuesday's action? Get caught up with our first quarter recap of Game 3 of the NBA Finals.

The San Antonio Spurs erased all traces of a rough offensive fourth quarter in Game 2, going a staggering 13-of-15 from the field to drop a 41-spot on the Miami Heat in the first quarter. The Heat had no answers, as the Spurs jumped out to a 41-25 lead after twelve minutes.

The Heat, however, would quickly slice the lead to thirteen, as Wade set Norris Cole for an open drain from three.

Both teams would trade empty trips down the floor from there, before a Danny Green floater brings the Spurs 14-of-16 shooting. 43-28.

Make that 48-28, as the Heat fail to find an open look on each of their next two touches, which leads to a Tiago Splitter reverse layup and a Patty Mills "BANG!" triple. The Spurs are 16-of-18 for 88.9% shooting at this juncture, forcing a Heat timeout leading 48-28 with 9:52 left in the third.

Most of the Spurs' looks were coming on the extra pass, as the Spurs were out-assisting the Heat 10-4 fourteen minutes or so in. Driving, kicking, and making the extra pass would have the game looking destined to be a blowout.

A big part of that? Danny Green, who does it all himself after the timeout with a steal, drive, and finish at the hoop to bring the lead to 22.

Two Dwyane Wade freebies would temporarily return the deficit to 20, but DANNY GREEN does it again with a sharpshooter trip on the return trip - making it 53-30. Spurs hadn't missed a shot in almost nine minutes.

Two turnovers for the Heat (and one for the Spurs) gives it back to the Spurs, and Kawhi Leonard rises up with five seconds left in the shot clock to drill a 21-foot jumper for the 55-30 Spurs lead. Heat full timeout with 8:07 left.

San Antonio was making NBA Finals history at this point, shooting 19-of-21 so far for a 90.5% clip. Leonard would lead all scorers in the first sixteen minutes with a staggering 18 points in 13 floor minutes.

The highest shooting percentage in an half during an NBA Finals game? 75% (Orlando in 2009).

LeBron would cut the Spurs' advantage to 23 out of the break with an easy look down low. The Spurs would make it 24 on a quick free throw the next trip.

San Antonio would miss two shots on their next possession, leading to a Chris Bosh flush. 56-34 Spurs.

Parker would re-extend the lead to 24 with a Tony Parker special, slicing and driving his way to the hoop.

Despite the score, the Miami Heat weren't ready to pack it in from there, however. James and Wade each find an open Rashard Lewis on the Heat's next two trips, and each time the three-point specialist drained on from deep. Spurs take a timeout, with the lead cut to 18. 58-40 San Antonio with 5:01 left in the first half.

San Antonio was still 20-of-25 going into the commercial, on pace for the best half shooting percentage-wise in NBA Finals history at 80%.

That would become 21-for-26 right after the timeout, on the timeless Parker-to-Duncan feed inside.

Dwyane Wade had a quick response, though, picking up a quick two on a 16-footer to bring the disadvantage back down to 18.

The deficit would fall to 15 from there, as a wild shot by Ginobli wouldn't fall followed by another Rashard Lewis triple - this time from the corner. 60-45 Spurs.

Tim Duncan would quickly get the lead to 17 on a 12-footer, but Ray Allen does Ray Allen things on the Heat's next look as he gets open for an easy three. 14-point deficit.

Tony Parker would score the next four, however, to bring the score to 66-48. Parker would have just six points at this point, but these two were big ones as they stemmed the Heat's momentum. After a bad pass by Ray Allen, the Spurs would take timeout with just 80 or so seconds left.

Each team would come up dry on their next two trips down the court, keeping the game at 66-48.

James quickly finds Bosh with a gorgeous pass for a dunk to drop the deficit back to 19 coming back from the timeout. Parker would get hacked while shooting though on the Spurs' next trip, dropping in two to make it 71-50.

The Heat would come up dry on the final touch of the first half, leaving it with the Spurs  leading 71-50 at the half.

The 21-point lead is the largest by a road team in the NBA Finals since 1996.

Also, as it stands, the Spurs' 75.8% shooting in the first half makes it the best half from a shooting percentage perspective in the history of the NBA Finals.