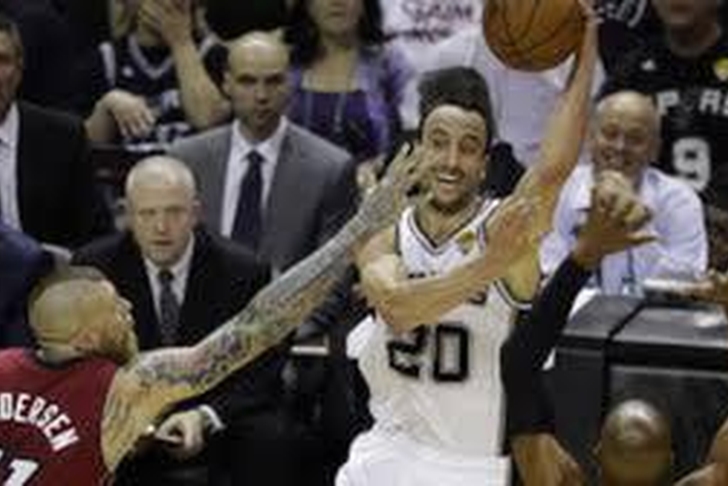 Miss any of the first 24 minutes of Sunday's NBA Finals Game 2? Catch up with our first half recap!

The Miami Heat and  San Antonio Spurs combined for 20 turnovers in the first half, which may have something to do with each team scoring just 43 points.

The first minute or so was highlighted by Tony Parker and Mario Chalmers trading two pointers, before Tim Duncan puts home his own missed layup with one of his signature tip-ins. Spurs up by two as Duncan had 13 at this point.

Danny Green would atone for his mistake straight away though, putting home a "bang!" three to give the Spurs the lead. LeBron James and Rashard Lewis had the perfect answer for Green's triple on the Heat's next two touches, each putting home a quick two to put the Heat on top 51-50.

From there? A LeBron James technical foul after jawing with officials following a controversial shooting foul call on a Duncan attempts. Spurs hit two of the three shots to make it 52-51 Spurs.

The next minute was an old-fashioned shootout with Rashard Lewis and Kawhi Leonard trading threes before a Ginobli 19-footer extended the Spurs' lead to three.

Miami would immediately cut the deficit back to one on a quick release Ray Allen jumper, but would fall prey to two glorious extra passes on the Spurs' next touch. Tic-tac-toe straight to Kawhi Leonard for a perfect form three and a Heat timeout. 60-56 Spurs with 6:26 left in the third.

A Rashard Lewis clank on a corner three brings us out of the break. The Spurs go to the reliable Tim Duncan on the block next trip down, as Duncan picks up a foul in the act of shooting.

From there? The LeBron James Show opened on the big stage. James scored the next eight points by himself, keyed by two beautiful triples to up his scoring output to 23 and give the Heat a two-point lead, 64-62 with 4:50 left in the third.

Boris Diaw brings the game back level with a gorgeous spin and score after the commercials, as neither could assert dominance at this point for very long.

LeBron James, however, looked to change all that. He scored four of the Heat's next five on a quick 5-0 run to put the Heat up by the same count. At this point, James had scored thirteen of the Heat's last fourteen points.

Duncan and Ray Allen trade twos, before Patty Mills drains a huge three to bring the deficit down to two. The Spurs would promptly make it a 5-0 run of their own on a beautiful pass from Tiago Splitter to Manu Ginobli. Game tied at 71.

Patty Mills wasn't done from there, hitting another clutch three for the Spurs after Miami had picked up two free throws. Spurs by one.

Wade swung the lead right back to the Heat on the team's next possession, dropping in a 16-footer for the one point edge.

Tony Parker gave the Spurs the one-point advantage again with a couple of free throws, before Wade again drops in a deuce - this time on a beautiful cut into the lane.

Tony Parker, however, wasn't willing to let the Spurs go into the break down by one, putting in another bucket to end the quarter's scoring. Spurs lead 78-77 at the end of three.