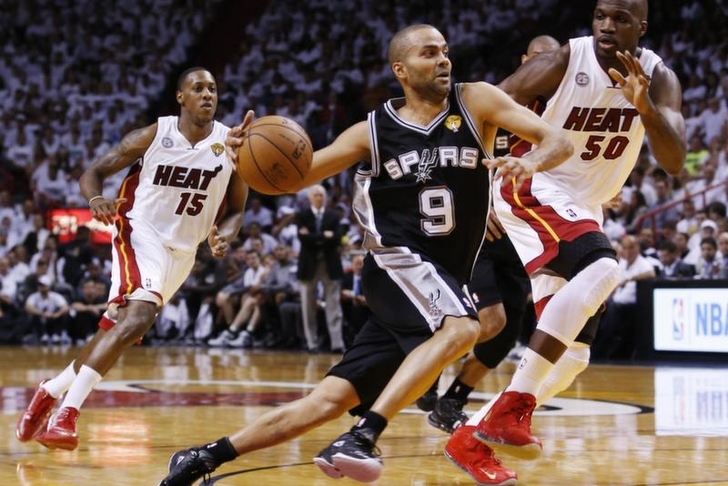 Miss any of Sunday's NBA Finals Game 2? Get caught up with our first half and third quarter recaps.

The Miami Heat's Chris Bosh opens the fourth quarter with his second highlight reel dunk of the night, picking up a foul in the process. With the free throw, the Heat take a 80-78 lead.

After some missed opportunities on both ends, Tiago Splitter tied it for the Spurs with his first field goal of the night. Rashard Lewis, however, brought back warm memories of his days as a Seattle Supersonic, draining a big-time three to give the Heat an 83-80 lead.

Duncan and Wade trade mid-range misses from there, bringing us to a Spurs full timeout after Chris Bosh hacks the Spurs' Boris Diaw. 83-80 Heat with 8:51 left.

The Spurs committed their first second half turnover out of the break, with Tim Duncan setting an illegal screen to draw the offensive foul.

A rare LeBron James miss gives Manu Ginobli a chance to run cross court and put in a beautiful running layup to cut the deficit to one. Another Heat miss, and the Spurs took the lead once again after Danny Green continued his torrid shooting with a triple. 85-83 Spurs.

LeBron James comes back in a bid for a second half for the ages, knocking down a 20-foot jumper to tie the score at 85. He would also be responsible for two points on the other end, stepping on Manu Ginobli's foot for the foul. Ginobli drained both freebies to give the Spurs a two-point lead once again.

In an interesting turn of events from there, the Heat's Mario Chalmers got slapped with a flagrant foul (1) after what looked like a wind-up and an elbow to Tony Parker's midsection driving to the basket.

Parker was in obvious pain at this juncture, missing both free throws and heading to the bench as the Spurs took possession. Parker remained standing next to Gregg Popovich for a bit, pleading his case to come back in as Duncan misses two free throws after a shooting foul.

From there, more LeBron James. James drilled an absolutely killer three with Kawhi Leonard draping all over him, giving the Heat an 88-87 lead. The Spurs call a full timeout after the teams trade misses, down by one with 5:30 to go. James had 32 points to lead all scorers at this point, with most of those tallies coming in a brilliant second half effort.

The game would go to a timeout from there, with Tony Parker readied to come back in after the break.

Ray Allen stuffs a Danny Green 23-footer coming back, as LeBron James subsequently picked up points 33 and 34 at the free throw stripe.

The Heat's three-point lead didn't last for long, after Boris Diaw drilled a trey off a Tony Parker dime. Game tied at 90 with 4:39 left.

The teams settle into a defensive war for the next 90 seconds, with neither getting a clean look and neither team scoring.

Chris Anderson came through to end the drought, dropping home an easy layup after some great team passing by the Heat. Yet, as there always seemed to be in this game, an answer was to be had - as Tony Parker nailed a high pressure triple in front of Chris Bosh to give the Spurs a one-point lead. 93-92 Spurs with 2:25 left as a Heat full timeout sends the game to break.

Spurs had a 34-12 edge in bench points going into the final three minutes, seemingly mixing and matching lineups at will. However, a huge night for LeBron James would make it anyone's game heading to the final stretch.

Chris Bosh missed a corner three coming out of commercial, but LeBron James slapped the ball out of Tony Parker's hands on the Spurs' next possession with the shot clock winding down. The initial call on the floor gave the ball back to San Antonio, and a lengthy review confirmed said call - most likely due to inconclusive evidence.

The Spurs got the ball back with just .8 seconds however, forcing Ginobli to take a quick shot from three which he missed.

Down by one with 90 seconds left, James kicked out a beautiful pass to Bosh on the sidelines for a giant three. The Heat took the lead 95-93 with just over a minute to go.

The Spurs committed just their second turnover the second half on their next touch, handing it back to the Heat after a rough pass by Manu Ginobli.

LeBron James was fouled in the act of shooting on the ensuing possession, making one of two to stretch the lead to three. Manu Ginobli, attempting to get two for one on the Spurs next possession, missed a 19-footer with 26 seconds left.

That would pretty much end the proceedings as Chris Bosh darts a beautiful feed to Dwyane Wade for a layup. 98-93 Heat with 9 seconds left.

Manu Ginobli would hit a three at the buzzer, but it wouldn't matter. The Heat took Game 2 in San Antonio with a thrilling 98-96 win.

LeBron James led all scorers with 35 points as the Heat head back to South Beach having taken home court advantage away from the Spurs. Series tied at one with Game 3 coming on Tuesday at American Airlines Arena in Miami.