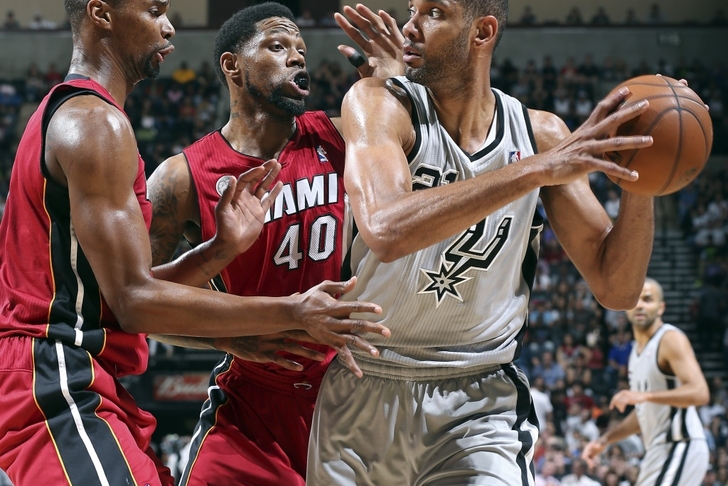 The San Antonio Spurs looked to pick up right where they left off in the first quarter, using deft passing to find Splitter for a clean look at the basket. Splitter was hacked, making one of two at the line to extend the Spurs' lead to seven.

Erik Spoelstra gave Norris Cole a chance to open the second on the floor, and he promptly drained a three. Ray Allen also got loose for his own trey, shaking Patty Mills to cut the Spurs lead to 27-26 with 10:30 remaining.

Patty Mills got a quick bit of revenge with an easily popped two, as the reserves for both teams turned the game into a very quick back-and-forth for the first two minutes of the third.

The teams traded looks and free throws before Ray Allen went into vintage mode, picking off a pass before dropping in a wide-open three to tie the game at 31 with 8:56 left.

Marco Belinelli continued the theme of back-and-forth action, drilling his own triple to send the Spurs into a timeout leading 34-31 with 8:26 on the clock. Ginobli and Duncan had combined for half of the Spurs points at this juncture, with Manu also assisting on three other Spurs buckets.

Norris Cole's earlier triple was ruled a two during the break, taking a point of the Heat's total, making it 34-30 coming back.

A Parker two was quickly nullified by a 8-0 Heat run - including a Bosh triple on a great passing sequence by the Heat and a pretty lay-in off the glass by a spry Dwayne Wade, giving the Heat a 38-36 advantage and forcing a Gregg Popovich timeout with just under seven minutes left in the half.

We came back from the advertisements with a quick Spurs passing clinic, leading to two Ginobli free throws after a physical foul. A quick Heat turnover then led to a pretty Tony Parker cut in the lane for two, giving the Spurs back the lead at 40-38.

The Spurs weren't done there. Another great show of unselfish passing led to a Tim Duncan flush at the rim. The Spurs' 6-0 run gave them a four-point lead heading to commercial with 5:26 left.

Dwyane Wade led all scorers at this point with 12. The teams combined for 15 turnovers in the first eighteen minutes, perhaps more to do with the high level of defensive talent on the floor than anything else.

Coming back, Ray Allen and Marco Belinelli traded quick threes. Allen's trey made him 3-for-3 from long range, scoring ten in ten minutes.

LeBron James took over the next minute or so, violently attacking the rim for a bucket along with picking up two free throws to get into double digits in scoring. Tony Parker quickly answered with a corner three, before James found another easy two at the bucket due to a bullet pass from Ray Allen.

Tim Duncan and Chris Bosh traded buckets down low at lightning speed right after, before Duncan floated another pretty one in on the drive to give the Spurs a 53-49 lead with 2:00 left. Duncan back to leading all scorers with 14 points at that point.

A couple Ray Allen misses and a Tim Duncan traveling call slowed down the action just a bit - sending the game into a T.V. timeout with the score unchanged.

Each team was getting wide-open looks despite a litany of turnovers, with both teams hovering around 50% shooting from the field. Both the Heat and the Spurs looked comfortable pushing the pace throughout the first 24 minutes of action.

Duncan hit of the two at the line to extend the lead to five, followed the teams trading misses to end the half.

Duncan led all scorers with 15 at this point as LeBron James paced the Heat with 13. Spurs 54, Heat 49 at the half.

Get up to speed on the rest of the action below: