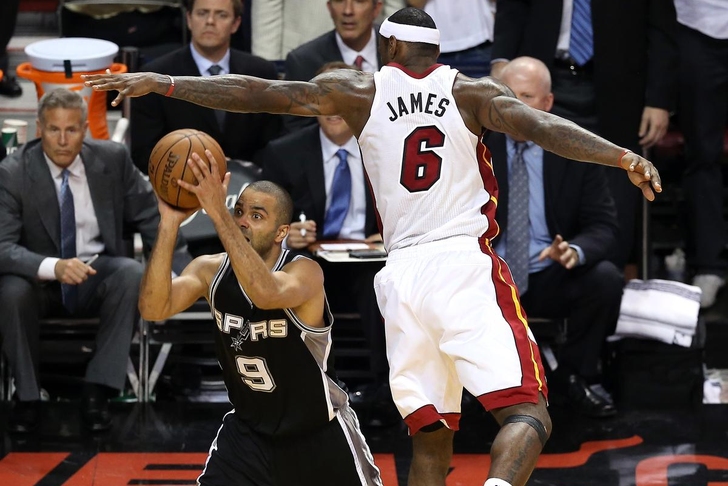 Chris Bosh and Tiago Splitter trade buckets to open the final frame. After a Miami Heat miss, Splitter grabs an and-1 on a controversial foul call, cutting the Heat lead to 80-79.

A Heat turnover hands the ball back to the San Antonio Spurs who promptly turn it over again - leading to a Chris Bosh jumper to stretch the Heat advantage to three.

Yet another Spurs turnover (their 20th!) gave it right back to the Heat, and Chris Bosh made them pay with a beautiful mid-arch three, picking up a foul in the process. LeBron James sat on the bench during the break trying to cool down with ice on his neck. Afterwards, Bosh extended the Heat lead to seven, 86-79, with a free throw - their largest lead of the night.

Kawhi Leonard hits one of two free throws after being hacked, scoring just his third point of the contest. After a Heat miss, the Spurs commit their 21st turnover - but a Heat miss after a quick cycle and a dead-eye Tony Parker jumper cuts the lead to four.

LeBron was noticeably limping by that point, asking to come out. Another Heat miss leads to a quick Duncan put-in down low, slicing the Heat lead back down to two. Spoelstra had no choice but to call timeout, removing James as the Heat led 86-84 with 7:31 remaining.

The rising temperatures in the arena caused James to indicated that he "couldn't breathe," leading to him coming out for the second time in the game due to discomfort. Both teams traded misses while James caught his breath, followed by Wade continuing his great effort with a jumper to extend the lead to four.

The Spurs had an emphatic answer on their next two touch, with Danny Green dropping in two absolute dagger threes to give the Spurs a 90-88 lead with 5:33 left. Chris "Birdman" Anderson and Tim Duncan trade pretty buckets in the paint before a Danny Green POSTER DUNK in transition extends the lead back to four. An Erik Spoelstra full timeout made it 94-90 going to commercial with 4:33 on the clock.

LeBron James is back in after the break, making his presence known with an aggressive layup. However, James had to be taken right out again after he cramped up on the landing. The Heat cut the lead to 2, but LeBron is forced to take medical help on the sidelines. The trainers have to carry LeBron to the bench, causing a long delay in the game.

Danny Green? Unaffected by the burning temperatures on the floor? He drilled another three after the timeout, followed by a Ginobli-to-Diaw connection to lengthen the Spurs' lead to seven, 99-92.

James remained in obvious pain on the sidelines while his teammate, Mario Chalmers, drained a clutch three to cut the Spurs' advantage to four.

The Spurs' 23rd turnover gave the Heat another free opportunity, but a missed corner three by Allen gives the rock back to the Spurs. Parker misses a lay-in on a blow-by move, but Duncan grabs the board and a foul.

On the side out, Kawhi Leonard absolutely hammers home a 26-foot three to bring the lead back to seven. At this point, the Heat looked absolutely spent - turning the ball over and giving up a crushing triple to Tony Parker in result. Spurs 105, Heat 95 with 75 seconds left.

The Heat failed to score on their next possession as Tony Parker and Kawhi Leonard added insult to injury with a three and a two respectively. The Heat dribbled it out and the game. Spurs go up 1-0 in the series with a 110-95 win.

Five Spurs players scored in double digits, led by Tim Duncan with 21. LeBron James led all scorers with 25, despite playing for just one offensive play after coming down with cramps with 7:30 remaining.

Miss any of the Game 1 action? Check out our other quarter recaps below: