VB | Saint Mary’s Puts up a Fight on Senior Day 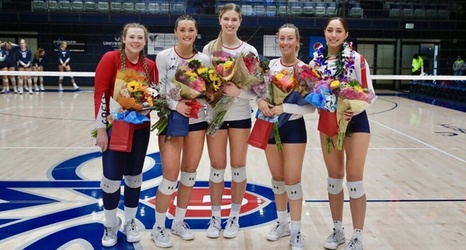 MORAGA, Calif. — Saint Mary's Volleyball honored its five seniors on Saturday afternoon as the Gaels hosted No. 4 BYU inside University Credit Union Pavilion. Entering the match, the Cougars had only lost three sets in conference play all season, but the Gaels were able to take the third set from BYU. Despite giving BYU a scare, BYU was able to beat Saint Mary's in four sets and claim the 2021 WCC Volleyball championship. Saint Mary's drops to 14-12 (8-9 WCC) with one match left on the year.

SHUTTING 'EM DOWN
From the beginning of set three, the eventual set that Saint Mary's would win, the Gaels made it clear that they were not going to get swept.