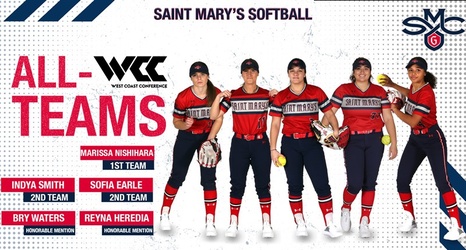 SAN MATEO, Calif. — The West Coast Conference announced their annual All-WCC teams on Tuesday afternoon, and Saint Mary's Softball landed five players across the three teams. Two of the five earn All-WCC honors for the second time in their careers, while three are first-time honorees from the conference.

For the first time in her career, Marissa Nishihara takes home first team honors from the West Coast Conference, after ending the conference slate as the Gaels most productive hitter. For the season, Nishihara hit .309 with a team-best 21 runs, but she picked her game up even more in conference play.