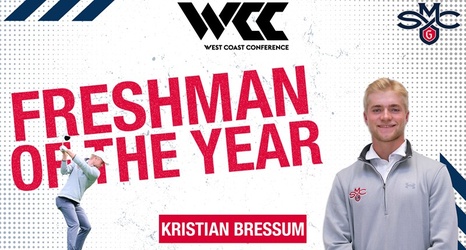 SAN MATEO, Calif – Kristian Bressum of the Saint Mary's Golf Team was tabbed the WCC Freshman of the Year, becoming the first Gael to earn the award since Andrew Putnam in 2008.

The Denmark native recorded three top 10 finishes this season, including third at the Rutherford Intercollegiate hosted by Penn State and second at the Visit Stockton Invitational hosted by Pacific.

Bressum had 12 rounds under par this season and was at par or better 15 times while carrying a scoring average of 72. He shot a 1-over 217 at the WCC Championship last weekend to lead the Gaels, and was the SMC clubhouse leader six times this season.