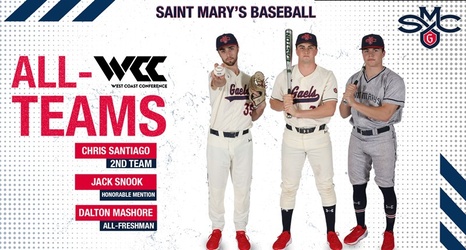 SANTA CLARA, Calif. – The Saint Mary's Baseball Team had three players honored for the success on the field this season by being named to the 2022 All-WCC Teams.

Chris Santiago, Jack Snook, and Dalton Mashore were each named to different All-WCC teams for their play in the 2022 season.

Santiago was named to the All-WCC Second Team after he led the Gaels in home runs this season while playing first and third base, and pitched 20 innings primarily out of the bullpen. He finished second in the WCC with 10 home runs, and had a .