Will Nemanja Bjelica be on the roster next season? 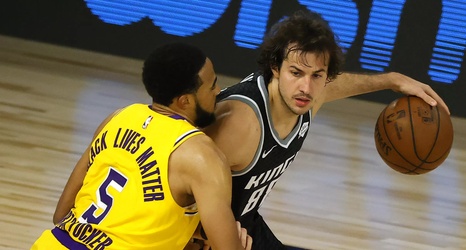 The Sacramento Kings will have a tough decision to make on power forward Nemanja Bjelica this offseason. The power forward started 67 games for the Kings and averaged 11.5 points and 6.4 rebounds while shooting 41.9% from the 3-point line.

New general manager Monte McNair will have to decide if the team will exercise its $7.15 million option for the 2020-21 season. The Athletic’s Jason Jones broke down why Belly remains a good fit with the roster.

“Bringing him back next season makes sense. If the Kings intend to play the fast-paced style while shooting plenty of 3s that McNair wants, Sacramento will need as many skilled and versatile shooters as possible.