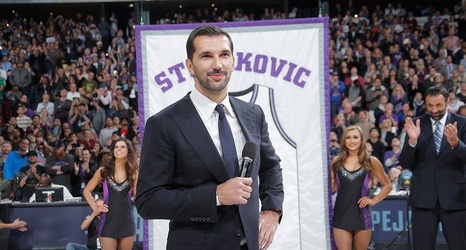 “This isn’t about me, this is about us.”

These are the words Peja Stojakovic spoke in 2014 when his jersey was officially hung from the rafters of Sleep Train Arena – and now Golden 1 Center.

Throughout his incredible 14-year career in the league, he averaged 17.0 points and 4.7 rebounds, while shooting 40 percent from the three-point-line.

Kayte asked No. 16, what it’s like to look up and see his jersey in the rafters, and the 3-point assassin still only thought about the team.