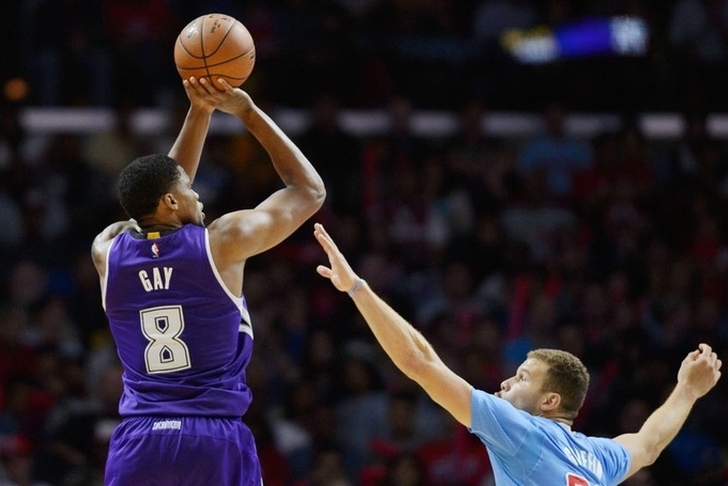 The 17-23 Sacramento Kings turned a two-game losing streak into a two-game winning streak with wins over the Utah Jazz and Los Angeles Clippers. The Kings are just a half game back of the No. 8 seed in the Western Conference, currently held by the Jazz. So, let's get you caught up with what happened last week and preview the week ahead with our Kings Weekly Update.

The Week That Was:
The Kings knocked off the Jazz 103-101 thanks to this game-winning shot by Rudy Gay.

Gay had 24 points and the Kings withstood a Jazz comeback attempt. DeMarcus Cousins led all scorers with 36 points and had a game-high 17 rebounds.
The Kings were 0-2 against the Clippers entering Sunday's game, but pulled out a 110-103 win. It was a balanced effort from the Kings, as six players dropped at least 13 points. The win snapped the Clippers' 10-game winning streak. Rajon Rondo and DeMarcus Cousins both had double-doubles.

Coming Up Next:
Sacramento plays three games this week, only one of which is on the road. That comes Wednesday against the Los Angeles Lakers. Given the Lakers' struggles, the Kings should be able to extend their winning streak. That will put the streak at three games, matching the season high.
After visiting the Lakers, the Kings return home for games against the the Atlanta Hawks and Indiana Pacers. Both teams are in the top six in the Eastern Conference, and will be a challenge for the Kings.

What They're Saying About The Kings:
Rudy Gay A Big Factor In Kings' Recent Success
Cousins Leading League In Scoring In January
Why It Does And Doesn't Make Sense For The Kings To Shop Gay
2016 Kings Full Of Optimism