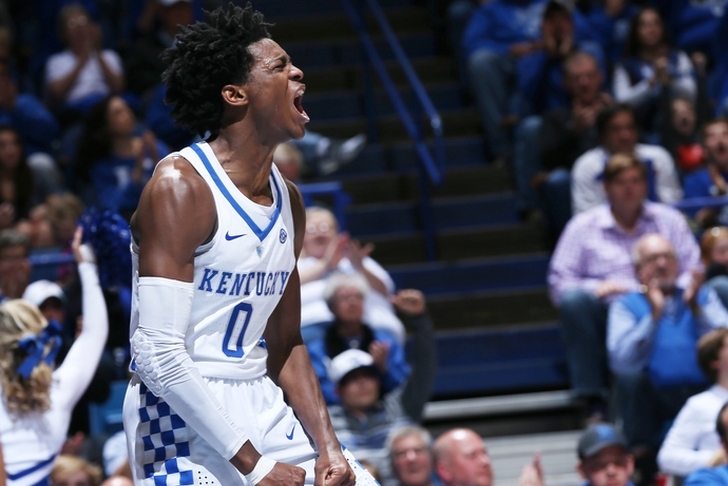 The Sacramento Kings currently hold the No. 5 and No. 10 overall picks in the first round of the NBA Draft, and they have a huge need they need to address at the point guard position.

There is reportedly mutual interest between the Kings and Kentucky point guard De'Aaron Fox, but he may not be on the board at No. 5. As such, Sports Illustrated's Andrew Sharp thinks they'll trade up with the 76ers to get Fox with the No. 3 pick in his latest mock draft:

We have a trade! None of the players who make sense at three make sense for the Sixers’ roster. Jayson Tatum is a clunky fit next to Simmons and Saric, while Josh Jackson and De'Aaron Fox have questionable jumpers—not an ideal fit next to Ben Simmons and his questionable jumper. So why not flip this to Sacramento and bring back two top-10 picks? It makes sense for Sacramento, too. Fox is the best guard outside Lonzo and Fultz, and he may have the chance to be as good as either one. Of everyone outside Fultz, Fox is probably the safest bet to be very, very good. His defense will be relentless, and on offense he's got John Wall-speed coupled with a Mike Conley floater. If his outside shooting develops, he's a superstar. All of which is to say: the Kings have made a number of bad gambles in recent years, but this would be a good one.

The Kings have a lot of holes they need to fill, and where happy getting two top-10 picks in order to do that. However, if they are convinced that Fox is a superstar in the making, look for them to trade up. Sacramento is expected to hold a workout for Fox.