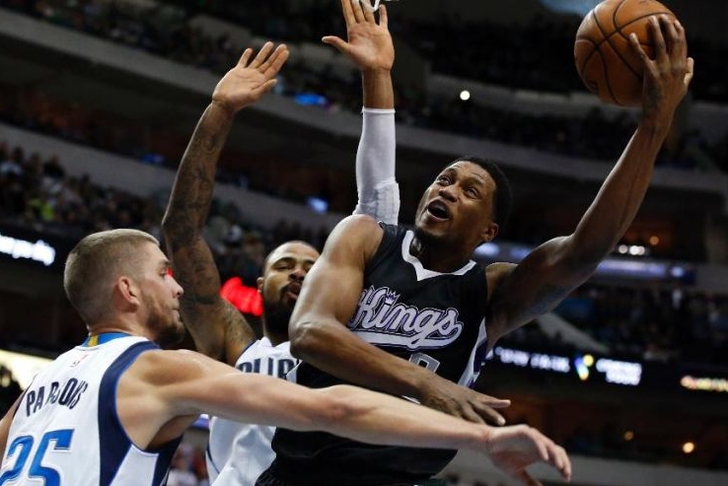 The Sacramento Kings (17-30) host the Dallas Mavericks (33-18) Thursday night in a battle between two teams hoping to bounce back from embarrassing losses to the Golden State Warriors.

On Tuesday, the Kings faced the Warriors for the final time this season, hoping to avoid a season sweep. Despite a solid start from Sacramento, the Warriors found their footing late in the first quarter and pulled away by outscoring the Kings 34-20 in the second quarter. DeMarcus Cousins led the way with 26 points and 11 rebounds and Rudy Gay chipped in with 20, but the Kings' bench was outscored 61-12 as Golden State's second unit dominated Sacramento's reserves.

The Mavs can relate. After going up 40-18 (!) on Golden State in the first quarter, Dallas was unable to keep Stephen Curry quiet. The Warriors PG went off in the third quarter, scoring 26 in the period and finishing with 51 for the game, including 10 three-pointers. After holding a 22-point lead at one point, the Mavs lost by 14. Now, they'll try to rebound against a Sacramento squad looking for their fifth win of 2015.

Can Sacramento get anything from their bench?

DeMarcus Cousins has been excellent this season, and Rudy Gay, Ben McLemore and Darren Collison have all played better recently than Sacramento's record would lead you to believe. The biggest problem for the Kings has been their lack of bench production - Carl Landry has struggled to stay healthy, and absolutely no one behind him has emerged as a consistent contributor. If the Kings continue to get torched every time they sit their starters, the losses will continue to pile up.

How much do the Mavs have left in the tank after Wednesday?

Chandler Parsons, Monta Ellis and Tyson Chandler all played at least 34 minutes last night, and playing against a fast-paced team like the Warriors is always a concern when they're coming on the first night of a back-to-back. Ellis and Dirk Nowitzki both faded down the stretch in Oakland, and they'll need to find a second wind to put away the Kings on the road.

Dallas might be gassed, but they should still be able to handle a Kings team with just one win in their last 10 games. Sacramento's lack of bench scoring (and defense...and rebounding...) has made it impossible for them to stop the bleeding despite how good Cousins has been, and it's hard to see the Kings winning against solid Western Conference teams until they do something about it.