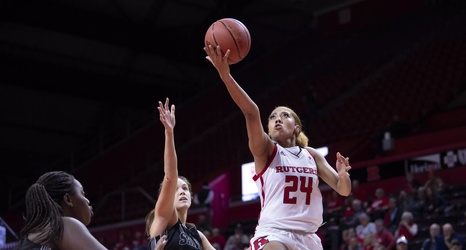 The Rutgers women’s basketball team is headed north of the border for Thanksgiving, as they are one of eight teams competing in the Vancouver Showcase. They’ll bring an undefeated record with them.

On Sunday afternoon, Rutgers (4-0) defeated Albany 65-39 as four players scored in double figures. Caitlin Jenkins produced her third double-double of the season, scoring 12 points and grabbing 10 rebounds. Arella Guirantes also scored 12 points, all on three-pointers, as she made 4 of 9 attempts. Noga Peleg Pelc (11 points, 5 assists) and Mael Gilles (10 points) rounded out the scoring.

This event takes place on three consecutive days between November 22nd through 24th.