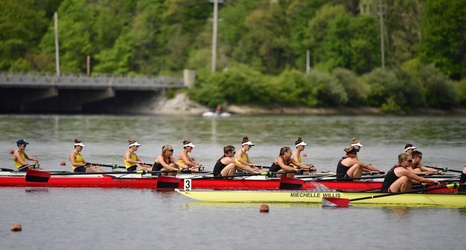 After the No. 7 Rutgers women’s rowing team had all three boats qualify for the A/B semifinals after the first day of the NCAA Championships, the second day of competition was highlighted by the Varsity 8 boat advancing to Sunday’s Grand Final. The Scarlet Knights finished third in the semifinal heat with a time of 6:14.057. They were was just 0.4 seconds behind second place Michigan. Along with No. 1 Texas who won the race, all three schools advanced for the chance to win the national title on Sunday.

The Rutgers crew in the Second Varsity 8 event finished in fifth place of its semifinal.