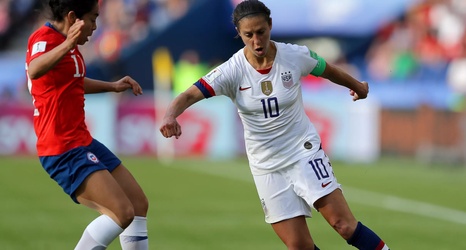 Rutgers legend Carli Lloyd continues to accumulate records in her already magnificent career, as she became the first player in tournament history to score a goal in six consecutive World Cup matches on Sunday. Lloyd scored twice to lead the United States to a 3-0 victory over Chile and clinching advancement to the knockout stage, despite having one game left in the group stage.

After being moved to the bench in recent weeks, Lloyd started on Sunday and proved she was still a world class talent for the United States.

Lloyd also moved into third place all-time in US history with 10 World Cup goals, trailing only Michelle Akers who has 12 and Abby Wambach with 14.