No. 10 Rutgers Field Hockey set for showdown with No. 4 Northwestern 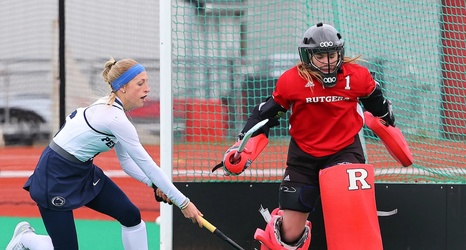 The Rutgers field hockey team moved up two spots to no. 10 this week in the NFHCA Coaches Poll after sweeping no. 9 Penn State last weekend. The Scarlet Knights won the first game 3-0 behind goals from Clayre Smith, Rachel Houston and Milena Redlingshoefer, while Gianna Mancini delivered the winning goal in a 1-0 victory last Sunday.

Redlingshoefer leads RU with 10 points this season and is tied for a team best three goals along with Kassidy Shetler.

The defense delivered two shutouts and was led by goaltender Gianna Glatz made 11 combined saves for two shutouts in the pair of victories over the Nittany Lions.