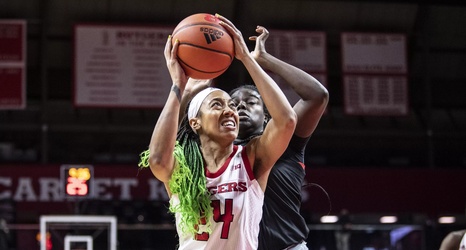 Last week, the Rutgers women’s basketball team lost by 4 points to no. 14 Maryland before winning two non-conference games over Hampton and Sacred Heart. Standout performances from Arella Guirantes and Diamond Johnson earned both players weekly honors on Monday. Guirantes was named espnW National Player of the Week and the Big Ten Player of the Week, while Johnson was named Big Ten Freshman of the Week.

Guirantes won the Big Ten award for the third time in her career after averaging 27.7 points, 8.7 rebounds, 6.0 assists, 2.3 steals and 2.3 blocks in three games. She scored 33 points and grabbed 10 boards in the loss to Maryland and continues to be an even more complete player this winter for the Scarlet Knights.