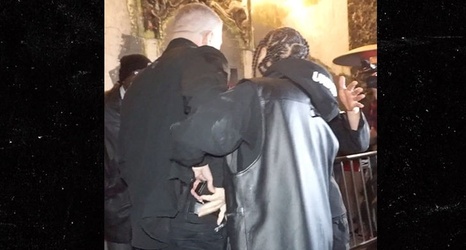 Tyga was dragged out of Floyd Mayweather's birthday party Saturday night by his neck ... and during the melee, he reached for a gun.

Tyga was at the Sunset Room in Hollywood, celebrating Floyd's 42nd, when someone in the crowd got into it with the rapper. It's unclear what they were beefing about, but whatever it was, security wanted Tyga out, and he was grabbed by the neck yanked out of the club.

Once outside, it escalated and at one point Tyga reaches for a grabs his security guard's gun.