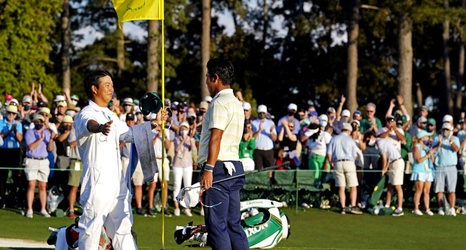 There are certain accomplishments in sports that are improbable to duplicate. Repeating as Masters Champion at Augusta National Golf Club is one of those feats that is not easily repeated. In a touching moment of reverence, Shota Hayafuji, who is Hideki Matsuyama’s caddie, was seen bowing to the hallowed grounds of Augusta National after Matsuyama’s victory.

Matsuyama finished the closing round with a one-over 73 to finish the tournament -10. Matsuyama tied Justin Rose for the lowest round of the tournament by shooting a 65 on moving day, and that moved him far enough into the lead that no one could catch him on Sunday.