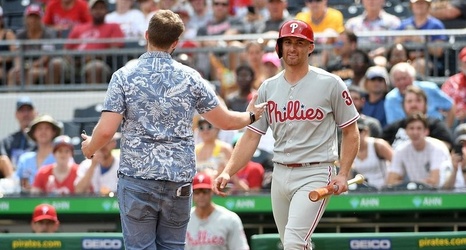 When a fan runs on the field, he’s guaranteed to get tackled by a security guard harder than a linebacker hits a running back. But what if he just takes an easy Sunday stroll across the diamond instead.

One man at Sunday’s Phillies-Pirates game in Pittsburgh leisurely ambled toward home plate in the top of sixth inning, with the apparent goal of shaking Phillies utilityman Brad Miller’s hand. Miller backed away slowly as if the man was a leper, but at least the man was taken into custody just as peacefully as he entered the playing surface.