Jonas Valanciunas Out Monday, Four Others Listed as Questionable 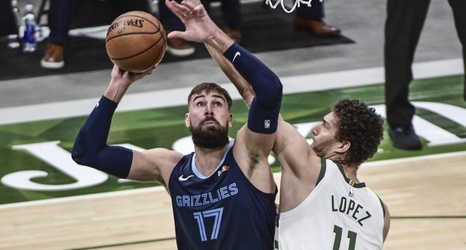 The Memphis Grizzlies provided an injury update ahead of their game against the Denver Nuggets on Monday. Jonas Valanciunas has been ruled out, as he is in the NBA’s concussion protocols, and Dillon Brooks, Justise Winslow, De’Anthony Melton, and Brandon Clarke are all listed as questionable.

Clarke, Winslow, and Melton all missed Saturday night’s victory over the Milwaukee Bucks, while Brooks was in the starting lineup and played 33 minutes, contributing 38.2 FanDuel Fantasy Points in the victory. Look for Desmond Bane to start at small forward if Brooks can’t go. Bane has a $3,900 salary, and Brooks has a $5,200 on the main slate at FanDuel.