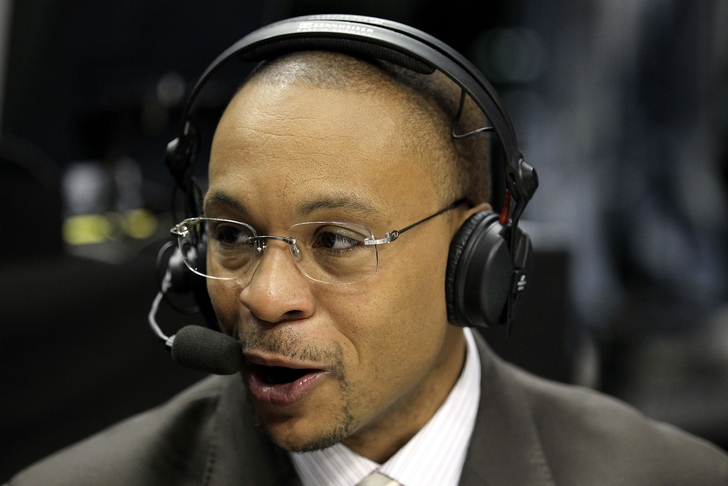 Gus Johnson is being rebuilt to turn us all into soccer fans.

The legendary announcer is the new voice of Fox Sports One, and is slated to be the American broadcasting voice for the 2018 World Cup once Fox takes over the broadcasting rights.

To prepare Johnson for his new role, Fox is assigning him to a metric ton of MLS and Champions Leagues games prior to his big assignment.

If you don't think this will succeed wildly, then you, my friend, my ignorant friend...do not know Gus Johnson's power.

For further proof, it is time to unveil...

The top 10 Gus Johnson calls that'll turn you into a raving soccer hooligan:

The Boston College Eagles are currently 4-11, and 9th in the Big East. However, this doesn't stop Gus Johnson from making Oliver Hanlan's dagger three in their overtime victory over Providence feel like ten Ray Allen clutch threes being hit at once. A midseason game between the San Jose Earthquakes and Chivas USA? Bring it on.

This call of Wilson's insane bomb in the 2011 Big Ten title game is an example of how an announcer's call can help cement a player's legacy. This is where I fully understood how good Russell Wilson could be - and I can't be the only one. Think about what Johnson could do with a 4-3 Chelsea/Man U barn-burner. THE POSSIBILITIES.

8. Knicks' history gets a sprinkle of Johnson's phlegm:

Imagine Brazil playing an upstart team from Cameroon in group play during the 2018 World Cup. Wait. Don't surf away. What if Cameroon wins that game in extra time, on an insane bicycle kick from 15 yards out? Gus would make it sound like this. Plus, there would be the added benefit of no Latrell Sprewell.

7. This Sesame Street brought to you by the letter "O."

When Matt Sylvester hits this three for the upstart Buckeyes, Johnson starts screaming "oh, oh!" like he's loudly reading his morning Cheerios. This'll probably happen EVERY TIME a striker gets gets the ball near their opponent's penalty box - there's a lot to look forward to.

6. T.J Sorrentine hits one "from the parking lot."

Please tell me I'm not the only one begging for an army of Gus Johnson clones to call every March Madness game from here to eternity. This classic call from the 2005 tourney of T.J. Sorrentine's monumental three in Vermont's 60-57 upset of Ohio State shows how powerless we are to resist Johnson's infectious enthusiasm.

5. Gus Johnson does both play-by-play and color commentary in one scream:

Gus Johnson's vocal cord-shredding squeal on A.J. Price's game-tying three extends through his color partner's attempts at chiming in on its significance. However, by screeching for a full five seconds longer than necessary, we got all the color commentary we needed. A one-man booth of Johnson for Spain vs England in Brazil? Yes, please.

4. Gus can create fireworks with his mouth. Seriously:

3. Gus can even make a Gumbel funny:

Johnson's otherworldly banshee screech prompts Greg Gumbel to deadpan that "Gus will be out of the hospital in time for tomorrow's game." This is the most entertaining thing a Gumbel has done since Gumbel to Gumbel. If Johnson can make a Gumbel shine, then the message is clear, America--soccer is going to become your game, one Gus call at a time.

The ultimate Gus Johnson Cinderella call--"Gonzaga, the slipper still fits!"  This play is  simply called "The Runner," despite the fact that the runner was missed. You are now free to go to Amazon to find your kid his or her very own Thierry Henry New York Red Bulls jersey. Seriously. I'll wait.

America, you don't stand a chance.

Embrace soccer in its BG (Before Gus) period, or risk being late to the party. It's your call.

How The NBA Got Its Groove Back