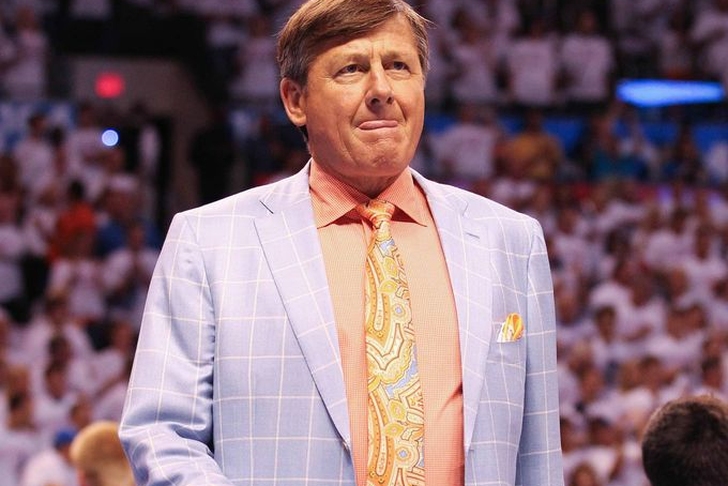 Craig Sager's legendary fashion sense has made him one of the best-known sideline reporters out there. His unbelievable confidence and willingness to wear basically anything on national television have endeared him to millions, so we decided to count down his 10 best (worst? craziest? boldest?) suits.

WARNING: Do not stare directly into Sager's tie. You might never make it out of there.

The stripes! Oh god, the stripes. Craig, you look like you made a suit out of a modern art painting.

Sager pays homage to his favorite children's book, James and the Giant Peach.

It's like looking directly at the sun - try to limit your direct eye contact with this key lime catastrophe.

What? Is that suit made out of a Russian fur hat? Are those rhinestones on that tie? This suit raises too many questions.

That suit is only, like, a 7 on the Sager weirdness scale, but the tie is what really makes this pop.

If you decided you were going to make a suit using only fabric available in my Grandma's kitchen, this is what that would look like.

Craig, we need to talk about this. You look like an Adventure Time character.

"Make me look like an Elvis impersonator who works at an Indian casino."

It's like he made a suit out of a Jackson Pollock painting. We are not worthy.