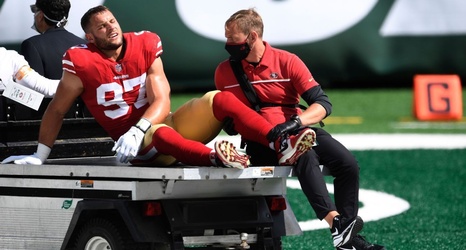 Sunday started with 49ers running back Raheem Mostert taking a pitch from quarterback Jimmy Garoppolo and bursting up the sideline for an 80-yard touchdown. It ended with the Seahawks making a goal-line stand and stopping Patriots quarterback Cam Newton to end a classic game in Seattle. In between those two moments, a star player seemed to go down with an injury every five minutes. Both Garoppolo and Mostert were done by halftime, two of five starters the 49ers lost in New Jersey.

You could make a pretty talented roster out of the players who were injured in Week 2.