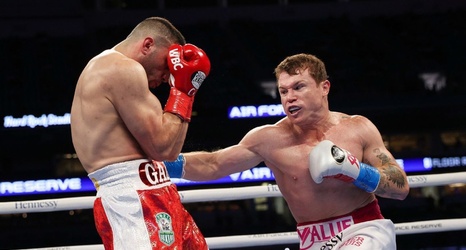 From the opening bell Saturday night, Canelo Alvarez appeared destined for a knockout victory against mandatory challenger Avni Yildirim. Alvarez didn't have to wait long for that.

Yildirim's corner threw in the towel at the end of the third round, as Alvarez picked up a technical knockout victory and retained his WBC and WBA super middleweight belts.

Alvarez (55-1-2) was the lone fighter in the ring pressing the action in the first three rounds. Early in the fight, Alvarez threw looping hooks around Yildirim's high guard and pelted the Turkish fighter's body.

And even in a fight against someone of Yildirim's caliber, Alvarez displayed the ring acumen that cemented his status one of boxing's top pound-for-pound fighters.