Astros pen delivers, Nats waste chances -- and now we have a series 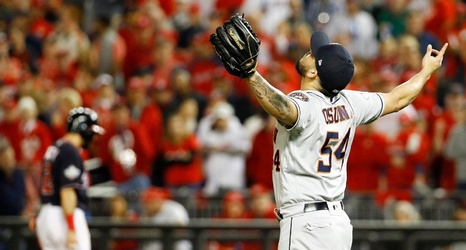 WASHINGTON -- The first World Series game in the nation's capital in 86 years won't exactly go down as a classic contest to remember, but the Houston Astros don't care about baseball elegance or splendor. They just needed the W. The Astros will enjoy their 4-1 victory that included baserunners all over the place, some magical 68 mph curveballs from Zack Greinke and a Houston bullpen that tossed 4 u2153 scoreless innings that means we won't see the first World Series sweep since 2012.

The World Series is now Washington Nationals 2, Astros 1 as we head into the critical Game 4 on Saturday night that will feature Patrick Corbin for the Nationals against some sort of bullpen game for the Astros.