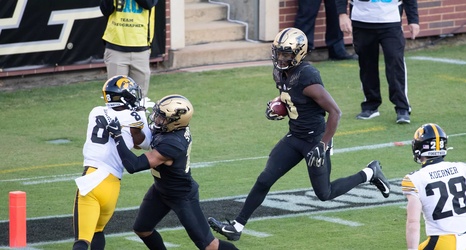 In a battle of turnovers, Purdue found a way late in the fourth quarter to win 24 to 20.

The newly founded defense, lead by Bob Diaco, openly tried to strip ball from the Iowa running backs and receivers all game long. In return, Purdue recovered two fumbles, both turned into scores.

The important one though, came late. With a long sustained drive, Iowa up 3, they were running their typical 4 minute offense to score a late touchdown to put the game away, again in typical Iowa fashion.

But, the Boilers knocked the ball out and on the back of Zander Horvath, the Boilermakers punch it in late, throwing a third touchdown to David Bell, to cap off a day of 13 catches for 121 yards and 3 touchdowns.