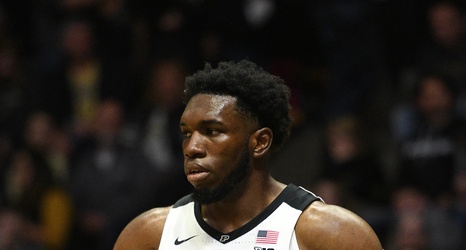 Less than a week after Aaron Wheeler announced he would be leaving the Purdue basketball program, Emmanuel Dowuona joins Wheeler in the NCAA Transfer Portal.

This comes as no surprise given the circumstances of his short Purdue career thus far. Dowuona came in as a 3-star recruit and labeled as a “project” and evidently ends up as a failed endeavor for Matt Painter and the Boilermakers. Playing in only 9 games across three years on campus, he averaged 1.3 points and 0.9 rebounds in 3.4 minutes per contest.

The 6’10’ big man was redshirted his first year in West Lafayette, followed by a season in which he was behind Trevion Williams and Matt Haarms in 2019-20.