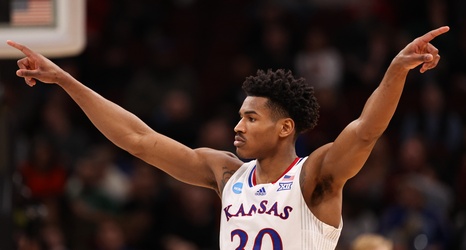 The top-seeded Kansas Jayhawks avoided becoming the third No. 1 seed to be eliminated in the Sweet 16 by defeating the fourth-seeded Providence Friars 66-61 on Friday at the United Center in Chicago, Illinois.

Kansas earned a spot in the Sweet 16 by beating Texas Southern and Creighton. The Jayhawks entered having come off a hard-fought battle against Creighton, and they continued the momentum from the end of that game into Friday's contest against the Friars.

Before Friday, the Jayhawks hadn't reached the Elite Eight since they did so in back-to-back seasons in 2015-16 and 2016-17. They haven't won the title since the 2007-08 season, but with teams like Gonzaga, Arizona, Kentucky and Baylor having already been eliminated, anything can happen.