'When I can't support on the pitch tonight, I will support in front of the TV in London': Arsenal outcast Mesut Ozil sends message to his team-mates ahead of Europa League opener after being left out of squad 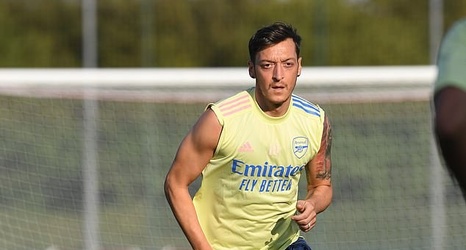 After slamming Arsenal's lack of 'loyalty' on Wednesday, Mesut Ozil has said he will still be supporting the club in Thursday night's Europa League clash against Rapid Vienna.

'When I can't support on the pitch tonight, I will support in front of the TV in London,' Ozil wrote on Twitter, before following up with the message: 'Let's go Gunners!!!'

Ozil was cut from Arsenal's Europa League and Premier League squads by manager Mikel Arteta, which prompted the German to lash out against the club.

The £350,000-a-week star spoke out on social media, saying that he is 'saddened' to be left out of the team, and saying that his 'loyalty and allegiance' to the club has not been rewarded.