What CHEEK! Moment Everton fan slaps Crystal Palace player Joachim Andersen on the BOTTOM as he goes to take throw-in at... before his manager Patrick Vieira attacked rival supporter during pitch invasion 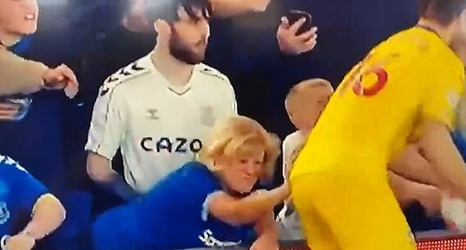 The middle-aged woman was seen trying to protect Alli in the final minutes of the crucial match last night, which Everton won at their home Goodison Park 3-2 after overturning a 2-0 deficit.

The video clip, which was posted on Twitter, showed England player Alli, 26, competing for the ball with Crystal Palace's Andersen, before the Danish player pushed his opponent near the advertising hoardings.