Police investigate after Crystal Palace boss Patrick Vieira is seen ATTACKING Everton fan who screamed at him 'suck on that you muppet!' as man, 25, is arrested after video appears to show Sheffield United striker Oli McBurnie stamping on a pitch invader 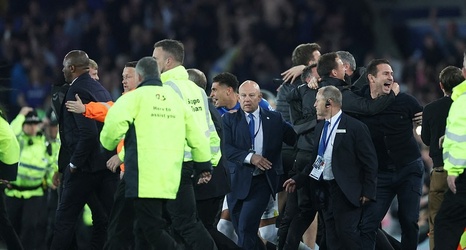 Police were investigating today after Crystal Palace manager Patrick Vieira appeared to kick an Everton fan who repeatedly taunted him during a pitch invasion after their match on another shameful night for football.

The Everton supporter involved in the skirmish at Goodison Park last night had filmed himself abusing the Palace boss, shouting: 'Suck on that, you muppet. Get in.' The fan then gave Vieira the middle finger and cheered, before adding: 'F*** off.' But then Vieira eventually kicked out, sending the fan tumbling to the ground.