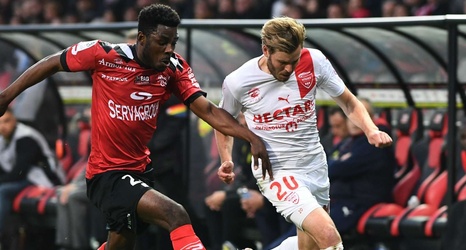 Guingamp defender Felix Eboa Eboa confirmed he will not be playing football again this season after he suffered a knee injury in Saturday’s Ligue 2 outing against Nancy.

Eboa Eboa ruptured his knee ligament during the encounter at the Stade Marcel-Picot and he was replaced by Jeremy Sorbon in the 77th minute as Guingamp battled for a 2-2 draw on the road.

The medical update comes as a blow for the Cameroon defender after playing 167 minutes of football in two Ligue 2 matches in this campaign.

After confirming the blow, the ex-PSG youth player appreciated the goodwill messages he received on social media and wished Mehmed Bazdarevic’s men the best for the season.