'Never again': Everton legends celebrate the Toffees' Premier League survival as they hail boss Frank Lampard for his achievement and praise fans for 'sticking together'... but Kevin Campbell begs them to steer clear of trouble in future 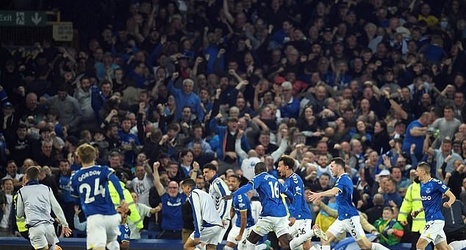 Everton legends and former footballers celebrated the Toffees' Premier League survival after they produced a stunning comeback over Crystal Palace on Thursday night.

The Blues came from 2-0 down to snatch all three points after Dominic Calvert-Lewin's late winner at a raucous Goodison Park to avoid the drop to the Championship next season.

Jean-Philippe Mateta and Jordan Ayew put the visitors up in the first half before Michael Keane clawed one back before the break, Richarlison found the equaliser and Calvert-Lewin's 85th-minute header sparked wild celebrations.

Former players praised the Toffees for staying up after a tumultuous season, hailing boss Frank Lampard for his achievement since taking over mid-season.